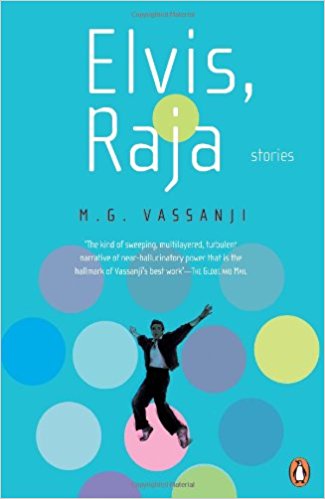 The book under review is one of twelve short stories in this fine and elegant collection by M.G. Vassanji, the well-regarded writer of Indian origin, African upbringing and Canadian domicile. Before actually reviewing the book, a short backgrounder about the author is essential; not only because Vassanji’s name is not so familiar to Indian readers, but because this background is of major relevance in his fiction. After his early years in Kenya and Tanzania, and MIT et al in the US, Vassanji qualified as a Nuclear Physicist and worked in Canada in this field, till he gave in to his passion—writing. Vassanji has won several literary prizes, The Giller Prize (Canada-based) twice, the Commonwealth prize and has authored six acclaimed novels apart from short story collections.

Vassanji’s stories fall clearly in the domain of immigrant literature. His concerns are reflected in titles, such as ‘The In-Between World of Vikram Lall’, or ‘The Book of Secrets.’ A recent documentary film made on Vassanji for Canadian Television is not surprisingly called, ‘The In-Between World of M.G. Vassanji’. And his fiction indeed occupies an ‘in-between’ arena, dwelling—within its geographical space of Africa-India-North America—on uncomfortable juxtapositions and displacements, discrimination, island communities and enigma.

At the other end of ‘displacement’ is a sense of community and assimilation—(Vassanji is of the Ismaili sect), which is keenly examined in his work, within itself and in encounters with others. Another area of ‘in-between’ exploration is in fact, the Hindu-Muslim dichotomy. India is sometimes visited, and is otherwise a hovering presence.

One strong strand in Vassanji’s fiction is of the past woven into the present: Farida, the wife is knitting a sweater

‘You do embellish,’ she says with a smile. ‘I don’t embellish,’ I defend myself. ‘I know the stories, and I know the characters—surely I can fill in?’ ‘You were always good at adding mirch masala,’

she insists, bringing in the past, knitting it, I imagine, intently into that sweater. In the strange story of the title, ‘Elvis, Raja’, the past intrudes again. The protagonist is on a visit to an old friend, who is now an Elvis ‘scholar’, his home devoted to Elvis research and an Elvis museum, which includes lurid cut-outs of Hindu gods supplanted with Elvis faces (fodder for zealous Hindu activists…). The protagonist, who is given to agonizing over his wife’s death, invokes her at a séance in this weird household, countermanding a desperate housewife’s attempts at seduction. The final escape is offered as gentle relief; from one past—of the Elvis fanatic—while the other past—of the dead wife—is more tenacious.

There is often a third party commentator, someone who has a connection to the protagonist and is enquiring into this past. In ‘When She Was Queen’, a son, wondering who his actual father is, enquires into the apocryphal family story of a deranged evening when his father gambles away his mother for a night. Thus, one bizarre incident has affected the family members for the rest of their lives, as also in another story ‘The Girl on the Bicycle’, where a peeping Tom on the girl’s nuptial night disrupts her psyche for years.

Diaries and letters are used. ‘Dear Khatija’, tells of a deeply felt separation after the violence of partition, when ‘Shivaji locked horns with mighty Allah’. A Hindu girl, Madhu, is separated from her ‘pyari’, Khatija, with whom she has had an intimate relationship. Madhu’s daughter finds her mother’s memorabilia in an old box, and quotes from the diary in which Madhu addresses Khatija with pain and longing, then goes on to her own commentary and letters on this relationship. The slaughter of partition around the characters stresses the cruel sweep of time and history, which is strongest in this story.

The women favoured by Vassanji are pale enigmatic creatures, causing a churning around the wake of their beauty.

‘When She Was Queen’: ‘My mother was a stunningly beautiful woman, with a bearing suggestive of quiet dignity and arrogance. In the evening she preferred to come out in a sari, which fell as naturally down her body as the plume of a bird; thus attired, when she made her presence known in a room, it was as if the lighting had suddenly altered. Even as a child I was aware of her brilliance wheshe was dressed and all made up.’

‘The Girl on the Bicycle’: ‘That vision of a slim, fair, thin-faced girl approaching on her bicycle is, in the constellation of memories of my hometown, a bright star, something that draws a wistful smile.’

The stories can be faulted for not being adequately action-packed; memories, recall, rather than immediate passion. But there is tension enough to keep the pages turning in spite of the meditative quality. This quality is reflected in the stress on religion and tradition, the role of the mukhi or religious ‘master’, the centrality of the mosque to the community.

Yet, not all the characters are blindly tradition bound.

‘Last Rites’: The sceptic, Bharwani, has been persuaded to accept Chchanta, the last rites for forgiveness, only after stiff resistance. But he refuses the final capitulation. ‘… I am firm about the other thing, I tell you. I insist. These two people here are witnesses to my wish. I would like to be cremated when I die, not buried in that cold ground … called Imm-igrant’s Corner.’ This throws the family and community into a state of confusion and guilt.

Indeed, there is an underlying nuance of breaking away throughout. Illicit sexual cravings and liaisons, seductions, a non-acceptance of things as they ought to be… But the immigrant’s underlying discomfort, encapsulated by Bharwani’s antipathy to the cold burial ground, is the major mood that permeates to stories.

This book as a whole has a novelistic feel because of its thematic consonance (including ‘The Expected One’, which though set in India, again deals with an Indian from Canada, who visits his ancestral village). Milan Kundera, who insists that his Book of Laughter and Forgetting is a novel in spite of the disparate stories, might not be averse to calling the Elvis, Raja stories a novel in that sense. Others would mouth those familiar words, Why bother, the novel is dead anyway. Is the novel not synonymous with all fiction? But while we are free to wrangle endlessly over literary semantics, classifications, the plain fact is that fiction is alive and kicking. Vassanji should be read as a valid exponent of that very living art.

Kamalini Sengupta is a former member of the Indian Administrative Service, a documentary film maker and a writer. Her latest novel is The Top of the Raintree.