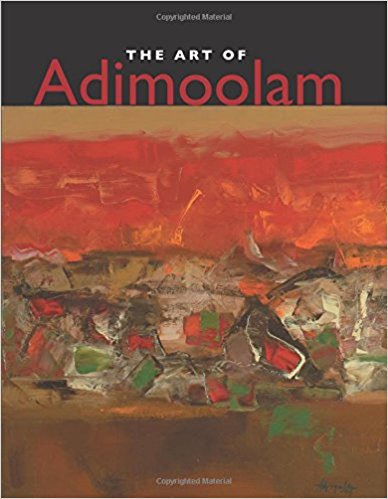 One of the key concerns of a monogram on an individual artist is to draw attention to a body of significant work that might find just passing mention in sweeping art historical overviews. Often, the contribution of an artist within a larger collective movement is noteworthy enough to merit a closer scrutiny as the artist may have some inherent qualities that sets him apart from the rest. The painter K.M Adimoolam is one such artist who has consistently charted a different path even though he was closely connected to the developments at the Cholamandal artists’ village, an experimental artists’ commune that came up just outside Chennai in the 1960’s. His work has recently been brought back into the public domain in the form of a book The Art of Adimoolam published by Mapin India in 2005. This is indeed a welcome step in the right direction as one rarely comes across well researched publications on contemporary artists, even though the book casts an eye on a fairly narrow period of his work comprising of paintings painted after 2002.

The book has four distinct segments to it. These sections interspersed with quotations by the artist himself and other critics, effectively lay open the ground for a close scrutiny of his work. The first is a lucidly written essay by Gayatri Sinha the New Delhi based independent curator and art critic. Through this, Sinha maps Adimoolam’s journey as an artist from his student days at the Madras College of Art in the 1960’s to his relatively quite existence today on the fringes of the edge of the modern metropolis of Chennai in Cholamandal. The second section is an overview of his black and white drawings executed in pen and ink on paper and the next section has colour reproductions of his paintings painted in the abstract manner. This ambiguous play between figurative drawings and abstract paintings is one of the most interesting features of the book as it highlights the indistinct nature of the creative process which more often than not has a pendulum like trajectory rather than a clear cut linear path. The rather laconic biography at the end of the book gives us an overview of the numerous exhibitions he has participated in as well as a list of the important collections where his work can be found. While most paintings and drawings reproduced in the book are untitled, a table of contents and a list of illustrations with their current location would have made the task of locating a desired image without having to riffle through the entire book a much easier for the reader. Despite these little wrinkles the book gives the reader an excellent insight into the mind and work of one of India’s leading modernist.

Adimoolam belongs to a generation of artists who sought to escape from the inflexibility of the avant-garde search for newness by trying to establish a back and forth movement between tradition and modernity. The ‘artists’ commune’ in the form of a rural retreat where one could restage authenticity by becoming one with nature is a fairly common modernist formation that found adherents all over the world. This formation often led to stylistic overlaps between the work of member artists, as close ideological and physical proximity often leads to a similarity of visual language. While abstraction has been the principle mode of expression in the works of artists from down south, a movement which is often referred to as the ‘Madras Metaphor’, it has usually taken on the form of formal abstraction of mythical subject matter. Gayatri Sinha in her text piece in the book Art as Incandescence gives us a thought provoking, condensed account of Adimoolam’s individual dilemmas and his connection to the larger issues that artists of his generation were struggling with in the era of high modernism. His four decade long journey through ‘religio-mythic images’ and ‘figurative drawing’ to ‘colour field abstraction’ by means of which he was eventually able to convey absolute transcendental values, has been etched by Sinha in a chronological fashion, starting with his early years as a student of the legendary K.C.S Paniker the inspirational principal of the Government College of Art Madras. The subsequent influence of Dhanpal, Munuswamy and Santhanaraj on his oeuvre too finds mention, while the main body of the essay deals with his individual journey as an artist.

Folklore and epics have often been used as a conceptual source by artists who use it as a backdrop against which formalist experiments can be carried out, in order to establish a localized context. It has often been a way of reclaiming and affirming an ethnic identity, as a way of seeking a place within mainstream Euro-American high modernism, through the act of establishing difference. This recoding of indigenous, at times religious elements within the secular circuit of a gallery based practice was a fairly popular way of establishing a continuum with the past in order to move towards the future. But in case of Adimoolam we see a fairly short period of engagement with this particular idiom. In the 1980’s for example he concentrated to a great extent on black and white drawings which exhibit a full array of styles ranging from a free play of lines to etching the aristocratic presence of a king like persona on paper. The past he gestures towards here is relatively recent. Photographic portraits of Indian royalty during the colonial era were a major source of visual appropriation for him in the 1980’s. According to Sinha ‘Adimoolam saw these figures in all their regalia as vital links with a disappearing India’. His close association with Tamil writers also led him to illustrated their works, making his drawings the only set of works, where we find a predetermined reference. In all his other works we see an inter-textual play of signifiers whereby the act of painting becomes a self governing sphere of activity.

The book carries a sizeable selection of his paintings which are rather well reproduced in colour. They cover a short, cohesive period of his recent work in which one sees a more universal appeal. He makes no attempt here to simultaneously straddle ‘high art’ and ‘folk forms’ the basic premise of a ‘pragmatic compromise’ arrived at by the artists at Cholamandal. Typifying the notion of a ‘disinterested aesthetics’ his paintings are an exploration of pure form that attempt to rise above contexts in order to aspire to a universalist language of expression. Interestingly enough in the climate of the 1970’s when modernism’s valorization of universal certainties and rational enlightenment values were being whole heartedly embraced by artists, abstraction became a means of expressing spiritual values that fell outside the realm of institutional religion. This de institutionalized spirituality had many followers in the1970’s who, to use Gayatri Sinha’s words, used ‘abstract floating forms and space as a pure idealized construct’. Striving for pure essence, rooted in self-knowledge that was expressive of ‘a concern with mystical implications’, art for Adimoolam became a self referential activity where paint and canvas would melt into one creating a fluid, transient presence. This is brought out rather well by Sinha in her essay, for she has been rather successful in her ability to invite the reader into the work. By throwing open the conceptual underpinnings of the work she avoids the pitfalls of writing a dry biographical account of Adimoolam’s achievements Instead she provides an insightful analysis of the work and its context. Her interpretive revelations are a result of deep probing into the artists mind and therefore are an effective supplement to the works reproduced.

While the book does makes claim to comprehensiveness by being titled ‘The Art of Adimoolam’ it essentially covers a small chronological period through abundant colour-plates and twenty-five black and white reproductions The complete absence of his early work is rather significant for it leaves us with the impression that this last body of work marks the conclusion of a long journey of discovery and that henceforth one may see from Adimoolam a comfortable, settled play with form rather than a constantly shifting stance of someone who is still young at the crease.

Shukla Sawant is a visual artist and critic. She is currently an associate professor of visual studies at the School of Arts and Aesthetics, Jawaharlal Nehru University, New Delhi.

Dynamics of Accumulation and Exploitation
November 20, 2017

New Revolutions in the Making
November 16, 2017