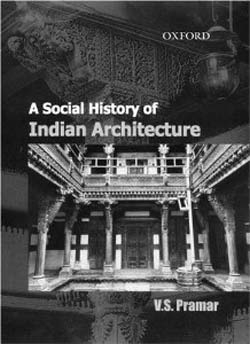 The central thesis of V.S. Parmar’s book is an important one. In the footsteps of subaltern historians he attempts to shift the focus of architectural history of India away from monumental architecture—palaces, temples, mosques tombs, to ‘lesser buildings’—domestic architecture, market places, inns and community halls. He claims that the ‘meaning of Indian architecture’ had been distorted by earlier historians and ‘one of the purposes of this work is to overcome that inadequacy’. There are several other shibboleths he sets out to tackle. For example, historical structures are usually studied in isolation and not as part of a pattern of settlement in a village, town or city. Therefore, ‘it is commonly assumed that all medieval palaces were located in the centre of towns, but this is not true for Muslim settlements such as Delhi, Agra or Ahmedabad. To describe a Mughal palace without emphasizing and explaining its eccentric location on the periphery is to misrepresent its wider architectural implications’.

Parmar also attacks the ‘one-sided specialist approach’ of art historians who have dominated architectural historiography. Their engagement with architectural matters have only provided limited insights into the creation of architecture.