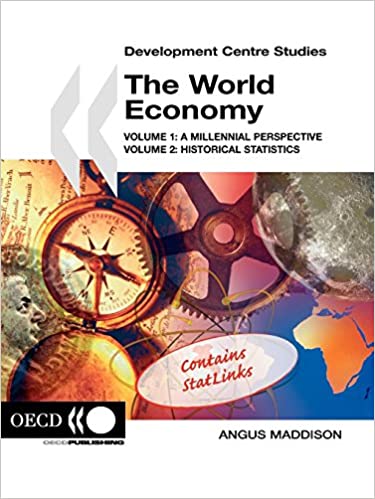 This is a compendium volume bringing together two earlier monumental works by Angus Maddison. The first, titled ‘The World Economy: A Millennial Perspective’, was issued in 2001. The second, a companion volume titled ‘The World Economy: Historical Statistics’, was issued in 2003. Both were commissioned by the Organization for Economic Cooperation and Development. The first academic paper to establish the grand sweep of Maddison’s historical vision appeared in 1962 in a relatively obscure journal, the Banca Nazionale del Lavoro Quarterly Review. Titled ‘Growth and Fluctuation in the World Economy, 1870-1960’, it carried forward the Kuznetsian search for quantification of the economic progress of human societies. This was followed in quick succession by a series of books focusing on different parts of the world in assorted periods. Among these was a 1971 book on post-Moghul growth in South Asia. A 1995 volume pulled it all together to provide long series covering the period 1820 to 1992 on the domestic product for 56 countries, which between them accounted for 93 percent of world output and 87 percent of world population. Needless to say, such an exercise had never previously been assayed, let alone achieved. It would not have been possible without the very solid foundations laid by scholars who had painstakingly constructed long series on individual countries or regions. Among them was the definitive work for India over the twentieth century by S. Sivasubramo-nian, who pieced together the domestic product in the territory covered by British India with that for the territories covered by as many as 560 independent princely states, to construct a single coherent yearly series for undivided India.