Joginder Paul and the Art of Fiction 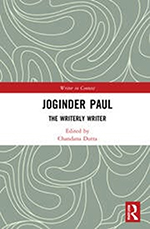 Over the last two decades, Indian Writing in English translation has emerged as a flourishing field that has seen a steady rise in the translation of fiction and other forms of creative writing in almost all Indian languages. While there is much to cheer about, what is missing is the study of critical discourses and literary traditions in regional languages in translation. Additionally, with translated works from different Indian languages included in universities’ curricula and a favoured area of research in literary studies, the scarcity of critical material in translation is urgently felt. Chandana Dutta’s book Joginder Paul: The Writerly Writer is a valuable step in that direction as it offers a wealth of scholarly and critical material on the well-known Urdu writer Joginder Paul and introduces to the reader his vast and varied engagements with fiction both at the level of form and language. Locating the writer within the literary tradition is much needed for Indian writing in English translation as the texts are likely to be read and taught in a vacuum, with little or no knowledge of other texts in the source language and the intra-linguistic literary tradition of the bhashas. A rich resource for readers and academics, this book is part of the Writer in Context series by Routledge, which is conceptualized with the objective of building an archival source on different Indian writers writing in regional languages. Chandana Dutta provides a fascinating template on how to collate and organize the material that portrays Joginder Paul to invoke TS Eliot as part of a vibrant literary tradition and yet showcase his individual talent. The availability of such archival material opens up a vast horizon for the readers, thus enriching the process and purpose of the translation.

‘Landscape of Fiction: The Layout of Joginder Paul: The Writerly Writer’ adds much to its appeal and accessibility to the reader. Divided into eight neat sections, each focusing specifically on one aspect of Paul’s oeuvre, the book includes selections from his novels, short stories, flash fiction and essays. Also, to enrich the reader, it offers critical articles, interviews, and literary commentaries on Paul by a host of well-known scholars. While each section stands independently, it is also in conversation with others. This cross-sectional engagement and analysis presents Paul as a writer with a refined literary sensibility and an acute sense of ethical responsibility.

The first section initiates the reader to the fictional universe of Paul by offering select short stories and extracts from his novels and novellas. This section highlights how Paul’s creative energy draws sustenance from the trials and tribulations of human existence and, despite their rootedness in a specific context, has a universal resonance. For instance, the beautifully translated story by Nirupama Dutt, ‘The Flight of Doves’, creates memorable characters, Lobh Singh and Fazaldeen, friends who were separated during Partition. Etched in Lobhya’s memory is Chawinda in Pakistani Punjab and while he continues to write letters and has imaginary conversations with his friend, his son tells him that it’s ‘been ages since the Chacha in Chawinda died’.