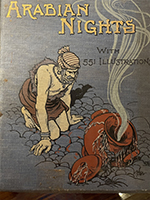 The Taj Falaknuma, a 5-star hotel occupying the former palace of the Nizam of Hyderabad, advertises itself as a ‘jewel amongst the clouds’. Every day, groups of hotel guests and tourists are shepherded through the suites, banquet hall, ballroom and grand staircases which were once the property of the richest man in the world, built during an era when the sun shone brightly on the British Empire. The treasures are displayed by guides as relics of a gilded age, made solemn by the same passage through time which has deposited layers of historicity on the opulently ordinary sofas, beds, study desks and shower cabinets.

Nestled between the courtyard of jasmine and a vast, unsupported staircase leading up to the world’s longest dining table, guests are welcomed in a high-ceilinged room. They are asked to sit at a grand table and check in by signing a tablet: with a plastic stylus instead of a fountain pen; confirming their arrival rather than dispensing titles and lands. This is the library; and it is the domain (on weekends between the hours of 5 PM and 8 PM) of a descendant of Dr. Abdul Hussain Arastu (‘Aristotle’)–entitled Yar Jung Bahadur by the sixth Nizam, who might have been wielding a fountain pen at the time. The evidence is unclear as to this last point.

The books were accumulated by the Nizams, including Salar Jung I, and the library was a place where the Viceroys of India (populating a Rogue’s Gallery overlooking the grand staircase) browsed while using the palace as their personal guest house. Although some of the books have fallen into disrepair (notably the classic 1911 edition of the Encyclopedia Britannica), there is order and method in the form of a register according to the Dewey Decimal Classification. 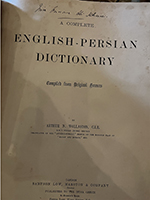 The Nizam’s own study has works on midwifery—a relic of the sixth Nizam’s interest in medical science. In this, the library is like any family collection, a reflection of the passions and obsessions of generations of owners. There are rare Divans (Complete Works of authors) and Kuliyats (collections) in Persian, books on mathematics cunningly dedicated to the fourth Nizam, possibly in the hopes of patronage, lithographic prints published in the 1800s, but very little fiction.