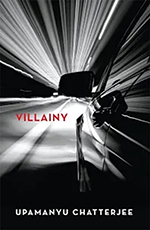 Several years ago, Nilanjana S Roy had defined the current crop of Indian Writing in English novelists as a ‘Doon School-St. Stephens’ conspiracy’. It was an interesting but true observation since the writers who were popular at that time were all products of these elite institutions and were quite adept at imitating western culture and simultaneously wrote in a style that was quite polished and urban. Upamanyu Chatterjee, belonging to this category, and at present a retired Indian civil servant, had shot into fame way back in 1988 by writing a definitive urban Indian coming-of-age story with his first novel, English August: An Indian Story. Several years later in 2000, he won the Sahitya Akademi award for Mammaries of a Welfare State. Now in 2022, his seventh novel Villany has hit the stands, and once again he focuses on a new class of westernized urban Indians who were hitherto ignored in the regional as well as the English fiction of India.

A major part of Villany is set in the 1990s and the storyline is all too familiar to anyone who has followed the lives of the rich and famous in post-liberalization urban India. There is an array of incidents showing the nexus shared by politicians, cops, the wealthy, as well as the not so wealthy, but who cherish ambitions to climb the social ladder at any cost. Reminding us of Balaram Halwai, the protagonist in Arvind Adiga’s The White Tiger, who came to work as a driver from a nondescript district town to the urban capital of Delhi and climbed the social ladder by hook or crook including murdering his boss, the characters and storyline of this novel too seem familiar to the average reader who is aware of how money and bribe can achieve impossible missions. There is Pukhraj, the young son of a rich jeweller businessman who possesses duplicate keys to all his father’s lockers and is adept at stealing his unlicensed revolver and unlimited stash of cash hidden in various nondescript places. Like a typically spoilt rich kid who indulges in doing drugs, gambling and also reckless driving with his father’s Mercedes and Bentley cars, he causes accidents and shoots innocent victims. The driver Atmaram and his son Parmatma (of same age as Pukhraj and hence his buddy in spite of class difference and whose honesty and good intentions to study and be successful in life are juxtaposed with the wayward son of their employer) are also significant characters especially when both the kids are sent to prison for murder. As is well-known, we have policemen, attorneys, false witnesses and even a judge who is bribed to free the rich brat and let the driver’s son serve the prison term. All the characters, though individually portrayed, seem so familiar yet unique at the same time.

With a meticulous eye for detail, as if he is going to sell his novel as a film script, Chatterjee brings in several other issues that plague our urban society. The issue of patriarchy, the boss’s affairs with his mistress whom he houses in a different apartment while his wife spends most of her time in the puja room praying religiously and observing all the so-called holy rituals including regular visits to her guru, the frequent greasing of palms of the employees in prison so that Pukhraj can resist some physical abuse and at the same time get all his extra comforts and buy his drugs; the issue of demonetization, and many other well-known incidents find mention in the novel through Chatterjee’s use of dark humour. The detailed rise and turn of incidents that help Atmaram the driver, find a new life away from Delhi, including marrying a childhood paramour of his and adopting her daughter, to settle into a comfortable life also find considerable space in the novel.

Towards the end of the novel we are transported twenty years later when Pukhraj is ultimately freed from prison and till the last page, the reader is taken through several new incidents which should not be discussed here for it would be letting the cat out of the bag. Artistically speaking, Chatterjee has given several expected as well as unexpected twists to the plot of the novel and it goes to his credit that he can make it into a page turner in spite of its enormous length. What sometimes irks this reviewer is the rampant use of expletives and cuss words throughout the book, which though justifying the class of people and the circumstances under which they speak, could have been reduced a little. As his earlier novels also prove, Chatterjee’s interest in the socio-political landscape of India, more specifically the 1980s and 1990s, when he himself as a government official was acquainted with many high-profile cases doing the rounds in Delhi, the novel can be termed as a ‘slice-of-life’ one for readers not so familiar with the character types and incidents prevailing during that time. The discovery of an unidentified dead body by early morning joggers in a neighbourhood park in Delhi on a mid-winter morning with which the story opens makes the readers believe it to be a simple whodunit, but Chatterjee capably manages to give it a twist and one has to read till the last page to understand the significance of this mysterious death. Recommended for everyone who would like to go through this meticulously crafted literary thriller, a riveting story of crime and retribution.