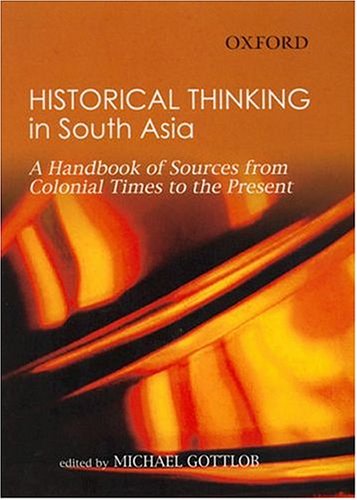 Intercultural Comparison
Narayani Gupta
HISTORICAL THINKING IN SOUTH ASIA: A HANDBOOK OF SOURCES FROM COLONIAL TIMES TO THE PRESENT by Michael Gottlob Oxford University Press, Delhi, 2004, 318 pp., 695.00
May 2004, volume 28, No 5

Thank God for Michael Gottlob, who has put together a book we have felt the lack of for many years, and done nothing about. Here is two hundred years (1786-1993) of ‘the development of historical consciousness in South Asia’—from William Jones to Ramachandra Guha. This is the translation of what was part of an 8-volume series, in German, on “historical thinking in intercultural comparison”. It can and should be used in Indian universities where ‘original sources’ are almost never referred to. And for that reason, it would be worth looking at its contents with attention.The book can be divided, for the purpose of this review, into three sections of roughly equal length—one, a long introductory essay by the Editor; two, a section of extracts from the works of three Europeans and twenty-four Indians writing before 1947; three, extracts from seventeen publications which appeared between Independence and 2002.The Introduction shows evidence of meticulous reading of a range of material. The Editor begins his account with the circumstances in which Europeans in the nineteenth-century read India’s past in the light of their own histories and of Britain’s role in India. He goes on to illustrate how these scholars’ work cast a long shadow across the studying and writing of Indian history by Indians themselves.