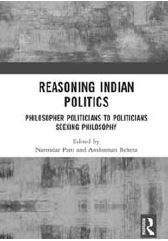 A well thought out compilation of essays in this edited book paves the way for  reasoning with politics, thoughts and theories that engross the scholars of politics invariably. It persuades us to think beyond the simplistic register of lamentation or celebration.

The editorial introduction elegantly titled ‘On the Why of Indian Politics’  establishes the basic components in the political thought of India and locates them in the general framework of science and values. Parekh tries to reveal as to what ails the academic approaches to thoughts, theory and philosophy.

Among the contributors  are scholars such as A Raghuramraju, Yogendra Yadav, Arun K Patnaik, PK Yasser Arafat, Anshuman Behera, Narendra Pani, and Devanoora Mahadeva (edited and translated by Bageshree Subbanna). The essays, which critically engage with the intellectually promising trope of thoughts with political relevance in modern India bring about pluralism in a set of values and associated reasoning in modern thought while underlining the significance of ‘Inclusive reasoning’ over ‘Abstract reasoning’.