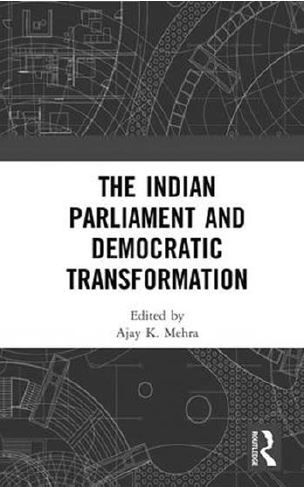 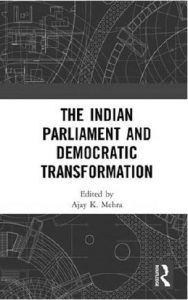 Indian democracy is in a state of transition. One approach to examining this ‘democratic transformation’, as the book under review calls it, is by studying the shifts within the legislature, since it is the legislature that mirrors the changes in the larger polity. This is the approach exercised in the edited volume by Ajay Mehra to bring fresh insights into the functioning of India’s parliamentary democracy, and in this regard the book makes a valuable contribution.

The broad contours of the book are well- laid out in the introductory chapter, which raises questions regarding three aspects: (a) The design of the institution (b) The gap between the design and practice of the institution and (c) The projections for the future. This is obviously a wide canvas and the author acknowledges that the idea is not to answer ‘these questions with any finality’ but rather to motivate more work in the area. But, in general, I found that most chapters in the volume focus on the contrast between institutional design and actual practice, and in the process reflect a deep concern that the institution of parliament has not quite lived up to the expectations.

Flowing from this thought is the first section of the book that reiterates the already well-established parliamentary ‘decline hypothesis’. A Surya Prakash, Ashutosh Kumar and Ajay Mehra’s chapters are vehement in their criticism of the institution by pointing out that a lot has gone wrong. Parliamentary sittings have dropped, disruptions are rampant, the number of criminal MPs are rising and ordinances have become the preferred mode of policy-making. None of these are novel findings though it helps that they have been cogently put together in the respective chapters.

A parallel stream to the decline hypothesis is the literature on parliamentary ‘democratization’, which highlights the broadening social profile of members of Parliament. Somehow the two literatures on legislative decline and democratization have crossed paths to give the impression that democratization is the cause for the legislative decline. This theory has gained considerable currency in the scholarly community, which is surprising given that the underlying causal argument has not been seriously examined. Sandeep Shastri’s essay reflects discomfort with the causal argumentation: ‘there is very little empirical evidence to prove that the changing social profile of membership and the increasing presence of state-based parties could truly explain the reduced time that the Lok Sabha spends on its deliberation.’

Perhaps one would have liked to see more such challenges to the conventional understanding. The introductory chapter does show promise as it pushes for going beyond the democratization argument: ‘While it (democratization) might be true to an extent, it does not explain a planned strategy to immobilize the parliamentary proceedings to embarrass the government.’ But the follow-up to this is generally weak as the other essays do not show much appetite for questioning the existing wisdom.

The volume is, however, abundant in provocation of other sorts. M Manisha’s analysis throws up an interesting dichotomy between the changes in the class and caste profiles of MPs. She observes that while the caste profile of the legislature has democratized, the class profile continues to remain elitist. There has been no work on how class elitism has impacted the work of the legislature, which may form a promising area for research. Asha Sarangi argues that the legislature is bound to have undergone changes as the idea of the ‘political’ itself has changed. Citing the examples of the Right to Information and the India Against Corruption movements she identifies that civil society has emerged as a lead player in spaces that were hitherto monopolized by the state.

The volume also has a few essays that touch upon the relationship between the parliament and the media. Sandeep Shastri contends that with the diminishing value of the floor of the House, MPs are looking out to the media to fulfil their ‘representative’ roles. As a result, the House is now reduced to a podium where issues are raised, whereas the substantive debates have been ‘outsourced’ to the media discussion rooms. This practice is of course criticized by Smita Gupta, who views that media should not replace the House as the forum for discussion. She feels it is only in the House that debates can meaningfully challenge policies and propose alternatives. Another contribution is Uttam Sengupta’s chapter which argues that both the parliament and the media know how to manipulate each other but it is parliament that more often manipulates the media rather than the other way around.

Then there are a few essays that focus on parliamentary instruments. Rononjoy Sen’s historical treatment of disruptions identifies that they are not a recent phenomenon but have evolved over time. He believes disruption has now become ‘as much part of Indian Parliament as the elaborate rules and rituals borrowed from the British.’ Vikas Tripathi’s impressive data work on the No-Confidence motions and Confidence motions brings to light the conditions under which these instruments gain prominence. Further the chapter asks a provocative question on why the NDA in the previous Lok Sabha did not introduce a No-Confidence motion in the wake of the 2G corruption charges but chose disruptions to register protest. This is an interesting perspective that attempts to connect No-Confidence motions with disruptions.

There are other chapters that focus on the institutional structures within parliament. Rekha Saxena’s essay elaborates on the role that parliamentary committees play in demanding accountability from the executive. As opposed to this, Ajay Singh opines that the notion of parliamentary accountability has become farcical as the executive exercises strong agenda-control over what and when issues are discussed within the House. Jaivir Singh and Raghab Dash detail the checks on delegated legislation, a provision that gives rule-making powers to the executive. Another chapter by Raghab Dash highlights the technicalities of parliamentary staffing and the institutional measures that ensure that the parliamentary secretariat enjoys autonomy. Rahul Tripathi narrates the evolution of the treaty-making powers of parliament and how treaty-making has altered with the advent of the coalition era. A thoughtful essay by Kripa Ananthpur brings light to the unexamined relationship between the parliament and the panchayat.

Overall, the volume is a fluent medley of analyses, observations and experiences from distinguished academicians and seasoned practitioners (including the legendary BG Verghese!). It demonstrates a broad coverage of many issues of contemporary interest to Indian democracy. I feel the book would inform as well as enthuse researchers to devote attention to the study of the Indian legislature.

Ajit K Phadnis is Faculty at the Indian Institute of Management, Indore.

Ideology & Identity: The Changing Party Systems of India by Pradeep K. Chhibber and Rahul Verma, using survey data from the Indian National Election Studies and evidence from the Constituent Assembly debates, show how education, the media, and religious practice transmit the competing ideas that lie at the heart of ideological debates in India. Indian party politics, commonly viewed as chaotic, clientelistic, and corrupt, is nevertheless a model for deepening democracy and accommodating diversity. Historically, though, observers have argued that Indian politics is non-ideological in nature. In contrast, Chhibber and Verma contend that the Western European paradigm of ‘ideology’ is not applicable to many contemporary multiethnic countries.