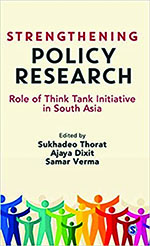 To study what happens on the ground, called field experiment in policy research literature, requires developing a research style by creative policy research scholars who can redefine the role of methodological concerns that may lend itself to the disciplinary evolution of politics and policy. In the first decade of the twenty-first century, a wave of field experiments in Political Science from Yale University marked a sort of renaissance in policy research in two different ways. One, the focus in research shifted to giving priority to the rigorous estimation of causal effects linking strongly to the experimental research design. Two, efforts were made to explore appropriate techniques by which field experiments need to be carried out and analysed. And by now, one finds a profusion of vigorous field experimental agenda in a real world setting, in a variety of social, economic and cultural contexts and, in particular, Asian and Latin American countries.

Addressing the concerns of policy research and the role of think tanks in South Asia, the book under review establishes that public policies are successful only when the local actors and the institutions involve themselves in designing and implementing them. The policies can only respond to the realities on the ground well if they are informed by locally generated data and analysis, by locally relevant evidence and knowledge and by a range of locally invested organizations and stakeholders. Donors at both the levels, international and domestic, must realize that to sustain development priorities, they must invest in capacity building of local institutions, both formal and informal. In order to fund various think tanks, the Think Tank Initiative (TTI)—a programme managed by International Development Research Centre (IDRC) in South Asia—was set up to bridge the gap in the ‘market for locally informed, context specific policies’, and to support think tanks to strengthen their autonomy, credibility and effectiveness for better policy impact. TTI, since 2009, has supported 43 think tanks in 20 countries, including 11 think tanks in Latin America and 14 in South Asia.

The book maps the role of think-tanks functioning in the public domain in the developing countries, captures the narratives of change within think tanks, and disseminates the strategies of strengthening think tanks through project funding. William and Flora Hewlett Foundation conceived and initiated the TTI in 2008, and under the aegis of IDRC, including funders like UK government’s Department of Industrial Development (DFID), the Bill and Melinda Gates Foundation (BMGF) and the Dutch Ministry of Foreign Affairs (DGIS), TTI bolstered better research and evidence for those who can use it for purposes of shaping policies and practice. TTI recognized, among other things, the role of think-tanks in policy research and development processes to achieve the Sustainable Development Goals (SDGs) and simultaneously strengthening the governance structures. Governments across the globe, particularly in the south, need robust analysis and research to frame effective public policies amidst increasingly complex and multidisciplinary global challenges. For instance, ‘Southern Voice’ network of 48 global think tanks brought evidence-based voice into the agenda setting for SDGs, giving a new voice and strategies for the global south.