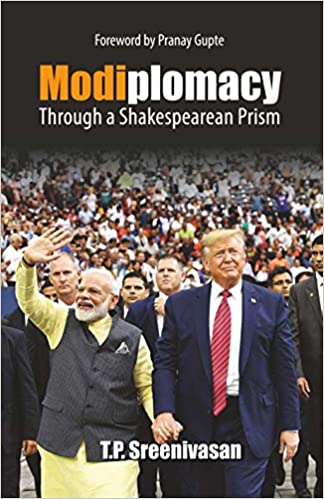 The book’s title intrigues. The author early on in the book explains it thus, ‘I began to see the pattern of a Shakespearean play, consisting of early successes, some complications, a climax, the emergence of a major event or character which changes the course of events, leaving the hero to disentangle the situation and emerge victorious as in this case, or fall victim to forces at work’ (p. xviii). At the end of Prime Minister Narendra Modi’s first term, the author—an English postgraduate—neatly organized his foreign policy into five acts of a play, on which is based the layout of book.

As with most Indians and voters, the author believes that Modi is in ‘the mould of a Shakespearean hero, who overcomes his problems by sheer dint of his wisdom and courage and emerges victorious in the end’ (p. xviii). Since the book closes at the start of Modi 2.0, it is not an unreasonable conclusion in light of Modi’s election victory. Even so, the author notices ‘tragic flaws’ (p. xviii) in the first term that potentially bring suspense into how the rest of Modi’s tenure at the foreign policy helm turns out. The book does not explicate what Modi’s Achilles heel is, but inadvertently the author does provide a clue.