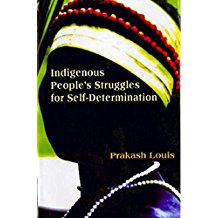 As the struggle for self-determination and against oppression is being waged in Central and East India, this book is a timely contribution. It is a useful compilation of the different policy briefs and declarations by indigenous people, United Nations and international finance institutions (World Bank and Asian Development Bank) on the rights of indigenous people in the past two decades. A select bibliography on the issue is also provided. Louis in his introduction to the book uses the definition of the category ‘indigenous’ as per the Copenhagen Conference of 1994, that is, people who have a common history and culture, common territory, and those that have been politically denied the right to take control of their ‘own affairs, wealth, territory and prospects of development’ (p. 14). Unlike the Government of India, Louis uses the category indigenous and insists on not using the constitutional category Scheduled tribes throughout the book. The material in the book is compiled under four broad sections.