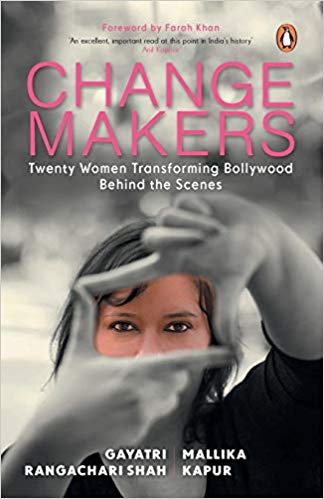 Bollywood is the surround sound that wraps us in its glitzy embrace. A constant presence and point of reference, a subject that consumes us and keeps curiosity levels high—stardom and celebrityhood, gossip and new benchmarks that define commercial success and keeps Bollywood in the public eye. We do know there is another world behind the show biz glitter but not many have told us these unsung stories of unknown achievers. If they happen to be women, neglect is a given. Not any more. Changemakers brings a radical difference to our perception. Shah and Kapur have gone into this virgin territory and profiled twenty women who have broken glass ceilings and unseen barriers to make their mark in a male dominated industry. They are pioneers and achievers against all expectations and many odds in fields as diverse as stunt woman (Geeta Tandon), screenplay writer (Juhi Chaurvedi), journalist (Anupama Chopra), filmmaker (Gauri Shinde), producer (Guneet Monga), cinematographer (Priya Seth), studio executive (Amrita Pandey), music director (Sneha Khanwalkar), gaffer (Hetal Dedhia), script supervisor (Shubha Ramachandra)—the last two are revelations of new Bollywood professions—editor (Deepa Bhatia), production designer (Amrita Mahal Nakai), lyricist (Anvita Dutt), marketing maven (Shikha Kapur) to name a few. There is a reputation manager, stylist, makeup artist, casting director to add to the list of remarkable women who have carved a niche for themselves in this boys’ club.

Some of the choices may be questionable. But not the research, revealing interviews and meticulous detailing that have gone into this engaging book that personalizes twenty vastly different women. The tone is intimate, yet objective. The style is crisp, except in a few profiles where words seem to take wing as if inspired by the subject. The garden apartment of Vinita Dutt, the reticent lyricist (of Queen) who started as a dialogue writer, is described in word pictures that convey its reflective mood. To get a writer to articulate how the creative process works is a rare skill. Shah and Kapur do it rather magically: ‘ I always imagine that there are words, like dust particles, all around me. So when I breathe, I move, they bounce off me’ she (Dutt) says, her voice becoming softer. ‘I feel if I am still and I don’t really do anything, the right words follow and they just kind of sit.’

Storytellers, song-makers and songwriters evoke descriptions that capture mood and nuance unlike some others that read like impressive CVs embellished with the required human interest quotient. Like Anaita Shroff Adajania, the new age stylist whose career graph is narrated at breathless speed and is exhausting like an acquaintance that never stops talking.