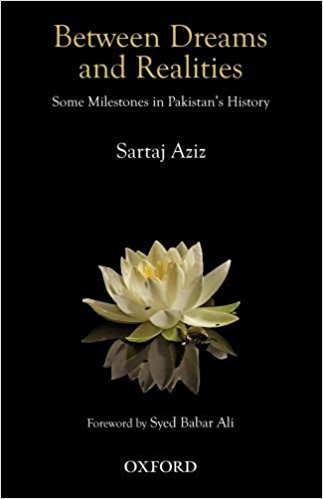 Between the idea And the reality ………………………… Falls the Shadow This is the way the world ends Not with a bang but a whimper T.S. Eliot, The Hollow Men This is a sad, sad book, the autobiography of a promising Pathan boy born in the Frontier town of Mardan in 1929, the year the Muslim League hit its nadir, unable to gather even the minimum quorum of 75 members required to run an annual session—and that too in a huge metropolis like Bombay. But by the time young Sartaj arrived at the Islamia College, Lahore in 1944 at the age of 15, the Muslim League, led by Mohammad Ali Jinnah, returned from self-exile in London and already the Quaid-e-Azam, and guided by the not so invisible hand of Lord Linlithgow, Viceroy and Governor-General, had begun its meteoric rise that would result in Sartaj Aziz attaining majority the year of the creation of Pakistan. Bliss was it in that Dawn To be alive And to be young Were very Heaven Six decades later, we have this story, this whimper, of a most distinguished Pakistani’s life, which takes its place quite naturally alongside Sherbaz Khan Mazari’s A Journey to Disillusionment (OUP, Karachi,1999) and Farzana Shaikh’s Making Sense of Pakistan (Hurst & Co, London, 2009).

What went wrong? What has dried up the dream? What has stoked the reality? No one is better placed than Sartaj Aziz to answer these conundrums—for his adult life spans and exactly matches the Rise and Fall of the Dream. His voice is, therefore, necessary listening for all those bewildered and despairing, as I am and Sartaj sahib seems to be, as to where our subcontinent went wrong and whether there is any hope at all of Pakistan and India finding a way to live together in peace and amity. Is it a matter of settling Kashmir? Or is there a deeper structural faultline to repair? The first clue is in the English translation prepared by his father of a tract written by his grandfather, Haji Mohtadullah, in 1914: ‘I am very grateful to God Almighty that I am a Muslim and a momin (true believer).