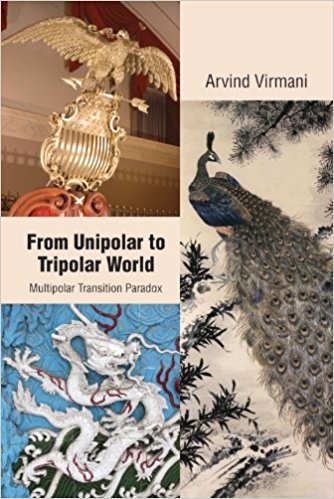 China and India are poised to join the United States as great powers well before 2050, shaping the world into a tripolar order instead of a multipolar one. With this strong assertion, the book tries to explain why the current multipolar global system will be short-lived than it is usually argued by international affairs analysts. Based on the articles he published in 2004-2006, Arvind Virmani wants to prove that his earlier prognosis is still attainable in the near future. One of the author’s most innovative inputs is not only the creation of a new power index which he would call the Virmani Index of Power, but also the refinement of several key concepts such as a country’s Actual Power which can be determined by taking into account three elements (Power Potential, strategic assets, and the will to acquire power). According to these new concepts, the author anticipates a bipolar world order in 2025 with China catching up on the US. By 2035 this bipolarity would however give way to a tripolar system with India joining the group. Although there will be a continual disequilibrium of Actual Power between the three giants, the Power Potential of India and China would at least be equal of that attained by the USSR at its peak period during the Cold war.

In order to avoid tensions inherent to the bipolar conundrum opposing China and the USA, the latter should encourage India’s growth to counterweight the challenger’s (China) mounting assertiveness. The projection of this scenario would induce a behaviour that would promote a premature tripolar order by 2025. The Indo-American nuclear deal of the mid-2000’s is a good illustration of this assumption. Indo-US relations will therefore become a keystone of the upcoming international system.