In the Corridors of the Defence Schools 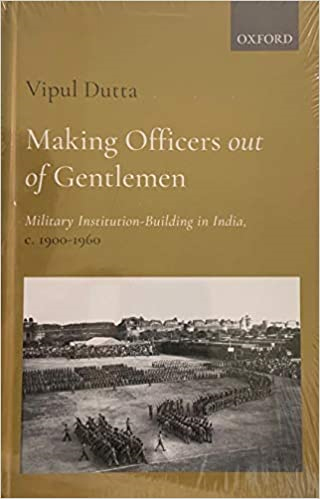 Vipul Dutta is Assistant Professor of History at the Department of Humanities and Social Sciences, Indian Institute of Technology, Guwahati, where he combines research and teaching interests in South Asian diplomatic, military, and economic history of the twentieth century. The book is an outcome of his doctorate from King’s College London.

In his dissertation, Dutta set out to plug the gap in knowledge in India’s civil-military relations between the demands for Indianization, or the displacement of British officers with Indian officers in the army, and the institutional development in terms of training institutions such demands entailed. Whereas there is enough spotlight on the former, with the contribution of stalwarts from the freedom struggle like Motilal Nehru and Jinnah finding mention, little is known of the manner in which their vision was made to materialize in the setting up of the Indian Sandhurst, the Indian Military Academy (IMA), at Dehradun in 1932, and the Indian West Point, its National Defence Academy (NDA), at Khadakvasla in 1954. He goes on to explore how post-Independence, the process of Indianization culminated in the establishment of the National Defence College (NDC) at New Delhi in 1960.

A missing piece in his narrative is the pre-Independence thinking that went into sending Indian officers to the Staff College at Quetta. By the mid-thirties, the pioneer generation of Indian commissioned officers from Sandhurst became of the service bracket to proceed to Staff College. Besides, State forces officers were also to be accommodated. This reviewer’s grandfather was the first State forces officer to be nominated for the first War course in 1939, three years after the first Indian army officers began attending. His proceeding for the Staff Course required prior upgrade-in-skills training in the constantly militarily-hyperactive North West Frontier Province including attachments with the 2nd Battalion (Berar) of the 19 Hyderabad Regiment (rechristened Kumaon Regiment in 1945), today’s 2 Kumaon, the Peshawar brigade headquarters and the Royal Indian Air Force’s oldest outfit, No. 1 ‘The Tigers’ Squadron, in Peshawar. Mention of the institutional churning that went on in Quetta, London and New Delhi on this aspect of Indians proceeding to Quetta would have completed his story.