In Search Of New Paradigms For Regional Ties 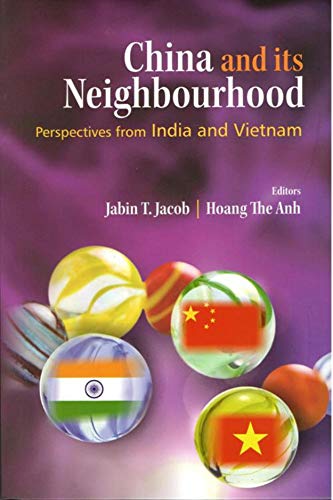 In Search Of New Paradigms For Regional Ties
Sudhir T Devare
CHINA AND ITS NEIGHBOURHOOD: PERSPECTIVES FROM INDIA AND VIETNAM by Jabin T. Jacob Pentagon Press, 2018, 295 pp., 799
September 2019, volume 43, No 9

The rise of China, its rapid economic transformation and military modernization, coupled with an aggressive and assertive position in its neighbourhood especially in the South China Sea in recent years, have caused a major concern in the region and beyond. After the 18th National CPC Congress, China under President Xi Jinping is seen to be strategically adjusting its policies towards its neighbours which in turn are engaged in working out their own relationship with China. The book under review is a unique and innovative exercise to create a more nuanced understanding of China’s external, security and economic policies by studying the perspectives from two of China’s major neighbours, India and Vietnam. Two leading research institutions, namely, the Institute of Chinese Studies (ICS) from India and the Vietnam Academy of Social Sciences (VASS) from Vietnam have pooled together the analyses of scholars from the two countries on a host of issues, both of bilateral and multilateral nature, as well as the balancing behaviour of other powers in the region.

The book ably edited by academics Jabin Jacob and Hoang The Anh has thirteen chapters covering a wide range of subjects—political, strategic and economic. The distinctive feature of this book is its focus on China-Vietnam relations with very perceptive insights about the complex and multi-dimensional nature of their longstanding interactions. As the book notes, ‘the relationship cannot be simply described as uniformly cooperative or conflictual at any given point of time. Vietnam appears to be a near permanent bulwark against China in Southeast Asia but it will not and cannot simultaneously be in a state of constant antagonism either.’ It is further emphasized that the two countries are still among the few Communist countries in the world and the relationship between the two Communist Parties is a significant factor. Despite strong nationalist tendencies on either side, both the Chinese and the Vietnamese attach much attention to people-to-people and cultural exchanges.

The objective of the book is stated to be not a historical study, but a work contextualized against the backdrop of developments of the last three years or so as the East Sea/South China Sea disputes flared and new and competing ideas of multilateral regional economic arrangements like the Trans-Pacific Partnership (TPP) and the Regional Comprehensive Economic Partnership (RCEP) emerged. In this regard, it is important to note that China does not practice anymore Deng Xiaoping’s dictum ‘hide our capacities and bide our time’ and despite clashes at sea between China and Vietnam and the worst anti-Chinese riots in Vietnam in decades, channels of communication between the two party leaderships have remained open. The observation that the Vietnamese exercise caution in their ties, mainly because of their dependence on the Chinese in the economic realm and do not appear to seek a comprehensive victory on each and every matter vis-à-vis the Chinese—merely holding the latter in check on a few key issues to be good enough—is revealing and indeed an eye opener.