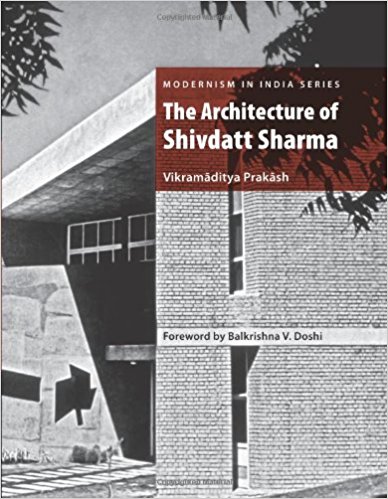 The Architecture of Shivdatt Sharma by Vikramaditya Prakash is the first in a series planned to unravel the ‘story of Modernism’ in India. It traces the practice of architect Shivdatt Sharma whom the author introduces as ‘the most distinguished private architectural practice to have emerged from the greater Chandigarh area.’ The author also recently contributed to another compendium on Chandigarh viz. Le Corbusier: Chandigarh and the Modern City, edited by Hasan Uddin Khan and has a personal connection with the city’s early years through his father Aditya Prakash who was involved with the team of architects that worked with Corbusier on numerous buildings of the city. This book however focuses first on Shivdatt Sharma’s contribution to Chandigarh and moves on later to his independent practice. It begins with a generous foreword by Balkrishna Doshi followed by an overarching introduction of Sharma’s work by the author, an interview with Sharma conducted by a student from the University of Tokyo, a reflective essay by the architect himself. The book culminates with a showcasing of 22 selected projects that vary in scale and expression. Towards the end of the book, readers will find a chronology of some additional works and Shivdatt Sharma’s biography to tie up the coverage.