In Honour of a ‘Constitutional Activist’ 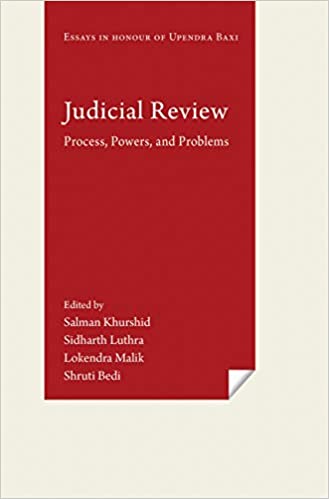 The essays for the edited volume have been written in honour of Upendra Baxi, one of India’s leading law teachers and an eminent scholar of constitutional law. As is globally known, in his long illustrious career as a university law teacher, researcher, philosopher and public intellectual, Professor Baxi has made seminal contribution to the broader field of legal learning and thinking through his impressive body of academic works, popular writings, memorial lectures and active civil society intervention. Given the enormous range of themes, broadly related to the interface between law and civil society in India that Baxi has engaged with both as a teacher and academic administrator, it must have been a daunting task for the three editors to select an overarching theme for the essays in the volume for thematic unity and coherence.

The theme selected is the judicial review process that is inherent in the Indian Constitution and whose scope has been expanded by the higher judiciary in a manner that has been subjected to both acclaim and criticism by the legal luminaries. The volume being in honour of the ‘constitutional activist’, it is understandable that the essays would approve of the expansion but the critical voices about the way judicial review has turned into excessive judicial activism/judicial overreach also finds mention if not informed discussion in a few essays. What adds to the value of the volume is that the contributors not only draw upon the scholarly writings of Baxi and his perspective on the subject but also bring in their own views. What is attempted in this review is to take a perspective on the subject by engaging Baxi as he appears in the twenty plus essays of the volume rather than undertaking the nearly impossible task of presenting the gist of each essay separately.