In Conversation With Ambedkar 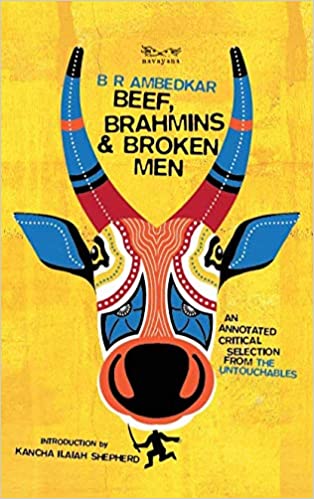 In Conversation With Ambedkar
Krishnaswamy Dara
BEEF, BRAHMINS, AND BROKEN MEN: AN ANNOTATED CRITICAL SELECTION FROM THE UNTOUCHABLES by B. R. Ambedkar Columbia University Press, 2020, 424 pp., price not stated
August 2020, volume 44, No 8

price not stated The view of Ambedkar as a radical philosopher who can help us understand and fight social and economic evils that Indian society is fraught with through the ages is gaining strength. The gains are a hard-won battle realized by Dalit-Bahujan groups working in various capacities and organizations. There is a further uphill fight for entrenching these gains to realize the ideals that Dalits led by  Ambedkar fought for. Defenders of Brahmanical privilege come in various guises, most often in the academic environment in the garb of progressives. Various strategies of discrediting, usurping, and sabotaging the Dalit movement manage to perpetuate themselves masquerading as progressive and liberationist. Intimidating and co-opting are some of the most common strategies. Reputed activists and intellectuals who contributed to social movements have and can become victims of these tactics. Arundhati Roy, whose piece—The Doctor and the Saint: Caste, Race, and Annihilation of Caste, the Debate Between B.R. Ambedkar and M.K. Gandhi—was latched on to Ambedkar’s famous text The Annihilation of Caste in an earlier iteration of this kind was one such victim. This was justified to liberate Ambedkar from the clutches of the pathological Dalits, an argument that was circulated backdoors while peddling the debate: who can speak for Ambedkar/Dalits? The issue at heart is not a question of representation but about access to the publishing industry which is dominated by the upper-caste elite who play the gatekeepers of ‘good standards’ and good aesthetic choices. It is imperative to understand the politics of ignoring, acknowledging, and appropriating Ambedkar.