In Continuation of a Tradition 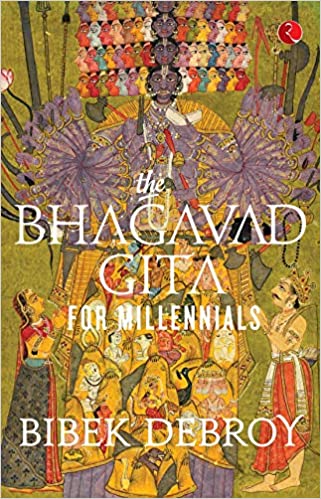 As an opening sentence, it is perhaps the best yet. A blind king, Dhritirashtra, asks his charioteer, Sanjaya, what his sons and the sons of Pandu, both of whom were wanting to fight, did on the battlefield?

The suspense-filled question, however, occurs in the middle of the Bhishma Parva of the Mahabharata.  Sanjaya’s  account has come to be known as ‘The Book’ sacred to the Hindu faith called The Bhagavad Gita, and so is often found as an independent book. Dhritirashtra’s question mentioned above is the opening question of that book.

Innumerable translations and interpretations have deliberated on the Bhagavad Gita, but somehow, the suspense still remains: not so much about who won or lost or was wounded on the battlefield, but more on what Sanjaya reported and what is meant by it.  Bibek Debroy’s new book with a seemingly ageist title, The Bhagavad Gita for Millennials, is a valuable addition to this. Valuable because it is not a translation of the Gita, but an understanding of it, in the context of the entire system of Hindu faith. It is meant to be that prod that makes millennials want to understand better what Sanjaya said. It is also useful as a prod for non-millennials to gain knowledge without appearing ignorant. And Debroy supplies the background, the tools. He does so meticulously and repetitively as a good teacher would.