In A Tolstoyan Sweep 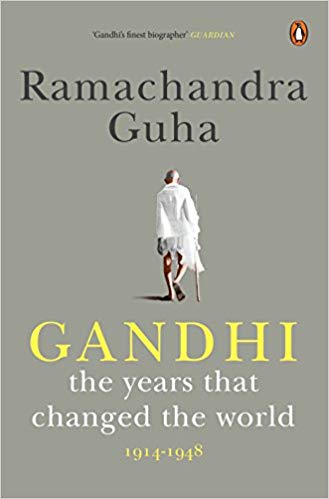 It is always a daunting task to review very lengthy books, and Ramachandra Guha’s latest offering, Gandhi: The Years That Changed The World, 1914-1948 (2018) is humongous by any standards. The book spans more than a thousand pages, and covers practically every month of Gandhi’s life in India after his return from South Africa in 1915 to his tragic assassination in 1948. In many ways, it is a sequel to his earlier work on Gandhi—India before Gandhi (2013)—which covered the period of Gandhi’s early life, and the story of his transformative struggle in South Africa, some forty-five years in all, in a staggering six hundred and more pages. Guha, as is plainly obvious from the length of his latest book, is no lover of economy. However, in all fairness, it must be mentioned with some emphasis, that the length of these books can hardly be joined issue with. Notwithstanding its encyclopaedic proportions, Guha’s latest book is an inviting read and delightfully easy on the mind. He has managed to deftly weave drab archival material—submerged in numerous voluminous collections and hitherto inaccessible to the general reader—tastefully into a lively narrative. He presents history with the aplomb of a bard, and tells the story of Gandhi with a greater immediacy and authenticity than it has perhaps been told before.

In cricketing parlance, something that Guha is fond of, it might be said that he is only an accidental historian, and does a running commentary on Gandhi, whose layered life he is having the privilege of both unfolding and witnessing from the hallowed galleries of the archives. He positions himself as an assimilator, a gatherer, and a collector of forgotten and unknown facts; as though he were rummaging into the cupboard of history for nuggets hitherto unseen, for any piece of valuable information gathering dust, or even for the conspicuous misses by Gandhi scholars so far. He delves deep into private papers, newspaper editorials—foreign and domestic contemporary records, government reports and personal memoirs of British officials and politicians to put together an exhaustive, authoritative chronicle of Gandhi’s life, as it happened on a day-to-day basis.

It might be impossible to give a summary of the book in any profitable way, at least none that would do any justice to the depth of the narrative or the expanse of the subject matter covered by Guha, but a brief idea about the structure and contents of the book would help prospective readers to understand the enormity of the exercise undertaken by him. The volume is divided into five parts, with thirty-eight chapters in all, and an Epilogue—discussing the relevance of Gandhian ideas in our times—at the end. Part One covers the early period of Gandhi’s journey in India, from his return in 1915 to 1922, and it is called ‘Claiming the Nation’. Gandhi’s rise in the Congress after the demise of Tilak, his epochal Satyagrahas of Champaran and Kheda, and the noncooperation movement is discussed at length in this part. Part Two is about Gandhi’s emergence as an international figure from 1922 to 1931; this part is aptly titled ‘Reaching Out to the World’ where Guha discusses the famous trial and incarceration of Gandhi, the Dandi March and the Round Table Conference in particular. Part Three titled ‘Reform and Renewal’ chronicles the events in Gandhi’s life from 1931 to 1937 where, arguably, the most important episode is his confrontation with Ambedkar. Part Four, ‘War and Rebellion’ chronicles Gandhi from 1937 to 1944. This part captures the gathering darkness that had begun to loom, the world was witnessing the most savage war in the history of mankind and serious questions were raised over the efficacy of nonviolence, even as Gandhi sounded his last political battle cry of ‘Quit India’. Gandhi had to grapple with the communal question and suffer the loss of Kasturba’s death. Part Five, pointedly named as ‘The Last Years’, spans from 1944 to 1948. The last part is the most poignant as it shows a heartbroken, dismayed Gandhi unable to prevent the vivisection of India and yet finding superhuman courage to break the cycle of mindless carnage by undertaking what Guha describes as his greatest fast before he was martyred by a fanatic. The narrative in all these parts and the thirty-eight chapters is interspersed with Gandhi’s personal evolution, his internal struggles and his constant endeavours towards self-examination.