In a Theo-centric Liberal Paradigm 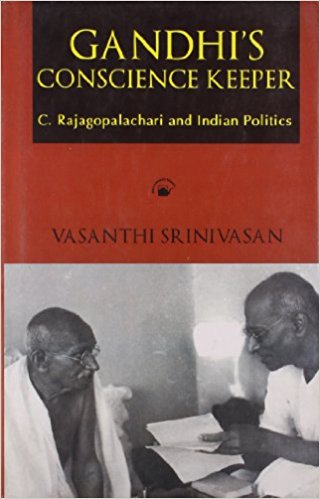 Images of India going to the polls in recent years have invariably tended to underscore the cynical lack of ideology and idealism on the part of leaders and opponents. The very real business of horse-trading and post-poll arithmetic has virtually obscured the possibility of ethico-moral politics—a potential that until the 1950s was a real one. Leaders of varying hues—Gandhi, Nehru, Vinoba Bhave, Ram Manohar Lohia, Rajagopalachari or Rajaji as he was known—walked tall straddling difficult and complex domains of post-Independence politics. To recall their lives and labour even if only to understand the erosion of civic values in today’s public life is an important exercise not to speak of its larger relevance in understanding historical change. It is in this context that Vasanthi Srinivasan’s biography of Rajaji, whom she calls Gandhi’s conscience keeper, draws our attention as she attempts to reassess his contributions to Indian political thought and its praxis.

Srinivasan’s biography of Rajaji is positioned within a theo-centric liberal paradigm that she asserts is the most useful explanatory device for understanding the apparent anomalies and contradictions of this leader. Damned as a conservative, even reactionary, admired for his courage and integrity, seen as an advocate of free market enterprise as well as a champion of reconciliation, Rajaji is not an easy subject for representation. And yet it is precisely these apparent contradictions that make for an interesting biography and open up questions about the challenges political leadership faced in Independent India from the votaries of caste, class and community. Rajaji did not in any sense stand for a superior moral-political position but there was in his advocacy of the pragmatic-realistic approach a commitment, a degree of individuation that was not vulnerable to easy seduction. It is his conviction that stands out and to that extent his appellative as someone’s conscience keeper seems particularly appropriate.

What is theo-centric liberalism and what was specifically theo-centric about Rajaji’s policies are two questions that need to be addressed. Srinivasan quotes from Dante Germino to explain theo-centric liberalism as a vision that recognized alongside human freedom and justice, the human quest for transcendence. Liberal dogmas of freedom and progress were not always adequate to confront challenges of chaos and confusion and that in turn produced a new register for the relevance of symbols of right action and intention. For Srinivasan, this is a handy label to make sense of the mélange of political and social ideas that Rajaji espoused—some of which did not sit so well or comfortably with new constituencies in Independent India. While this label is certainly a useful device to theorize an individual’s political credo, it is not entirely complete as an explanation and certainly does not account for all his preferences and prejudices. That Rajaji was a reforming brahmin politician who like so many of his community was modern in his public life while being deeply committed to certain conventions in his private life that stopped far short of containing radical or emancipatory potential needs more analysis. As a participating publicist, like so many of his contemporaries, he was committed to modern civic virtues, opted for pragmatic and practical solutions and was moved by the ethical politics that Gandhi stood for. Yet his was a schizoid liberalism especially in the private domain of family life where a deeply conservative and gendered perspective on contraception and reproductive management and household labour was evident. Srinivasan does not fully confront the limits of Rajaji’s views and attempts to explain all the inconsistencies and flaws by either speaking of his natural caution and moderation or by theorizing somewhat ineffectively his preference for pragmatic and practical wisdom. This is especially evident in the way the section on Rajaji’s religious views are analysed. Admittedly Rajajai preferred to see religion in an instrumentalist light as providing only the external form and not the substantive content of politics. This in itself was no major omission but in intellectual terms it certainly did not engage with the more radical challenge that the opposition party in southern India—the non-brahmin or Justice Party—mounted.