Seasonal Trade Down the Millennia 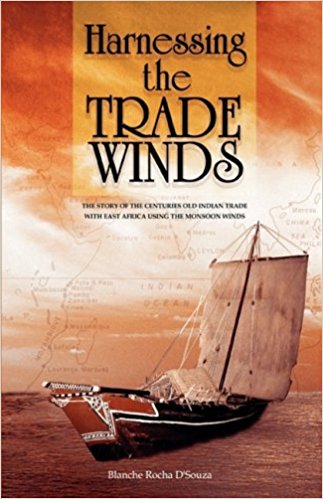 Blanche D’Souza’s book Harnessing the Trade Winds—The Story of the Centuries Old Indian Trade with East Africa Using the Monsoon Winds, challenges the prevailing viewpoint that ‘the first Indians came to Africa as railway construction workers, destitute coolies, artisans, clerks, accountants and soldiers, and that the present Asian population are their descendants’. D’Souza notes that the exploration of the East African coast began much earlier than that of the western coast, ‘but it has less of a history’, and that by ad 1,000 there existed an established trade between northwest India and the villages of what would become latter-day Swahili city-states. Through D’Souza’s exploration of this seasonal trade we learn that historical references to it stretch as far back as two millennium if we were to rely on travel accounts and geographical details recorded in the earliest Indian scriptures. Mention of the sources of the River Nile and Lake Victoria, indicate that Indian exploration of the African continent stretched beyond coastal trade sites.

The Vedas refer to a mysterious realm called Chandristan or country of the Moon where exist the Mountains of the Moon … in which the Nile or Neel Ganga (Dark Ganges) has its source’. There is even a distinction made between the ‘Neel Ganga and Shvet Ganga’, i.e. the White Nile and the Blue Nile. The intriguing discoveries of Indian teak inside Egyptian monuments, the presence of mummies wrapped in Indian silks, and excavations at Mohenjodaro (2,500 bc–1,500 bc) further ‘reveal that a sea borne trade existed with Mesopotamia and Egypt’.

On receiving a paper from the Asiatic Researches of 1799 containing an extract from the Puranas, the British explorer Speke wrote in his journal: ‘It is remarkable that the Hindus have christened the source of the Nile Amara which is a country at the northeast corner of Victoria Nyanza’. Similarly, accounts by inveterate travellers Vasco da Gama and Dr. Livingstone also record an extensive mutual trade between India and the East African coast.