Implications for the Global System 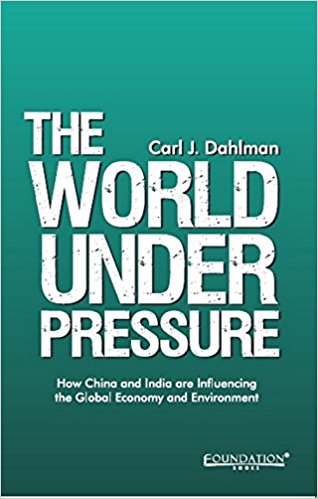 Implications for the Global System
Jabin T. Jacob
THE WORLD UNDER PRESSURE: HOW CHINA AND INDIA ARE INFLUENCING THE GLOBAL ECONOMY AND ENVIRONMENT by Carl J. Dahlman Foundation Books, 2013, 301 pp., 795
October 2013, volume 37, No 10

Studying Sino-Indian relations or comparing the two Asian giants across multiple indicators and themes is today a veritable industry for scholars, analysts, publishers and policymakers. Most published works deal with the conflictual aspect of China-India relations and are produced by policy wonks and analysts in think-tanks who by the nature of their profession need to publish frequently in order to remain relevant and/or in the limelight. But many scholars in universities or research establishments also have found publishing such books a lucrative exercise, egged on, no doubt, by the publishing industry that sees a large public interest and hence, market, in the fraught relationship between the two neighbours. In the case of Indian books on China or Sino-Indian comparisons, most are shoddily-researched and poorly-produced and while Chinese and other foreign publishers certainly have higher publishing standards, they too cannot necessarily claim original insight.