Imperial Garden Out of Nature’s Jungle 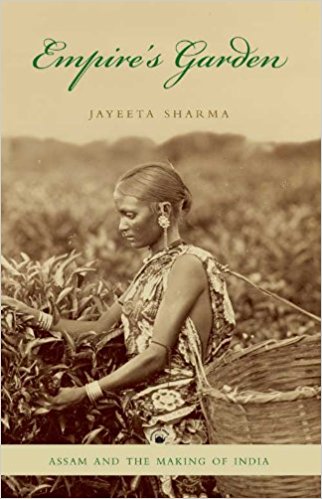 Empire’s Garden by Jayeeta Sharma is about the North Eastern province of Assam. The objective of the book was to show how a vast wilderness was transformed into a flourishing greenery of tea-plantation around which a colonial state was entrenched, whole new economic pursuits begun, the de-mography was altered, new migrants found entry and settlement in this new garden space, how newer concepts of ‘progress and develop-ment’ grew and were sought after, how langua-ges sought to be standardized, and community identities were constructed afresh even through secession from each other and the politics of identity that emanated from it. In the process certain long distance migrants had assimilated with the host country totally and even became the apostle of culture whereas certain consti-tuent groups drifted away and asserted sepa-rate communal or racial identity.

The book opens with an account of dis-covery of tea, the manufacture of the first bat-ch of drinkable Assam tea, its sale followed by the gradual development of tea plantation bas-ed economy sponsored by the colonial state. The vicissitudes of the journey-the story of a carefully carved out plantation sector by im-ported labour, the dilemma over labour em-ployment, experiment with tribal labour force and eventually relying on indentured labour following the pattern of West Indies, elimina-tion of local competition and the capital con-trol from Calcutta-emerge quite fascinating-ly. The advent of Kaya (Marwari traders), Bengali Clerks (described as Sylheti-clerks, a local pejorative term unbecoming in an acade-mic work), influx of Nepali grazers, the East Bengali Muslim farm settlers as the economy grew around tea are well brought out. There was simultaneously resurgence of the Assamese cultural nationalism.