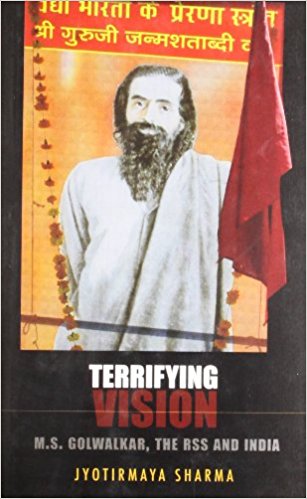 Terrifying Vision is a slim little book on the ideas of the most visible ideologue of the Rashtriya Swayamsevak Sangh. Its author had earlier explored and written on the world and moods of four well-known makers of the Hindutva ideology (Hindutva: Exploring the Idea of Hindu Nationalism (2003). The present volume, is a sequel to that work, and its main title suggestive of the stridency to which the ideology graduated, and the organization and praxis to which it was integrated. At a time when Hindutva has high investment stakes in politics it has produced various exponents who sing it at various tempo and timbre and spawned outfits who are authorized and have disowned by their sagely leaders according to convenience. That is understandable in the games that politicians play. But ideally, Hindutva is a sacred idea, as old as the hills—and the Veda—imperishable and non-negotiable.