Illuminating Past Patterns And Future Challenges 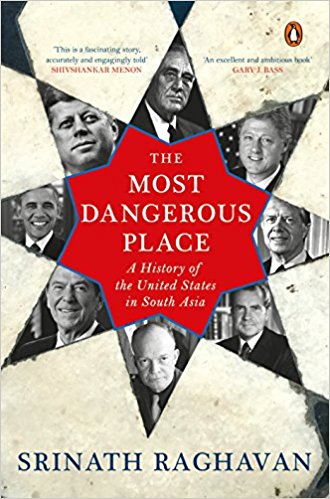 Illuminating Past Patterns And Future Challenges
Ali Ahmed
THE MOST DANGEROUS PLACE: A HISTORY OF THE UNITED STATES IN SOUTH ASIA by Srinath Raghavan Penguin Random House, Gurgaon, India, 2019, 453 pp., 799
January 2019, volume 43, No 1

Lawrence Freedman, the leading British strategic thinker and Head of Department of War Studies at King’s College London, once mentioned to this reviewer that Srinath Raghavan was the best student he ever had. He was his doctoral student and later a colleague at the department. He has written some of the best books on military cum diplomatic history on South Asia; to name a couple: War and Peace in Modern India: A Strategic History of the Nehru years (Palgrave 2010) and India’s War: The Making of Modern South Asia, 1939-45 (Penguin 2017). Formerly a short service commissioned officer of the infantry, he went on to complete his higher studies under Freedman as an Inlaks scholar. In deference to his guru as ‘a mark of lasting gratitude, affection and esteem’, he dedicates the book under review to him.

In the words of Raghavan, the book is, ‘in many ways a culmination of my research over the past fifteen years on international history of modern South Asia. It is also a product of my close engagement with the international politics of the region during the same period’ (p. 378). He has over the period worked at the Center for Policy Research and has also been a member of the National Security Advisory Board. From the perch of a leading member of Delhi’s strategic and academic communities, Raghavan had a ring-side view of the period that witnessed the simultaneous drawing closer of India and the United States (US) and the US’s intimate involvement in Af-Pak in the aftermath of 9/11. The latter part of the book—laid out chronologically–deals with these years.

Raghavan covers the new century in a mere 35 pages, somewhat sparse when compared with some 65 pages of the preceding two decades beginning with the Soviet misadventure in Afghanistan. The two periods are separated by the intervening one of the end of the Cold War and the US’s relative distancing from events in the region in the Clinton years. It is perhaps this distancing that led up to its return yet again and this time in full strength.