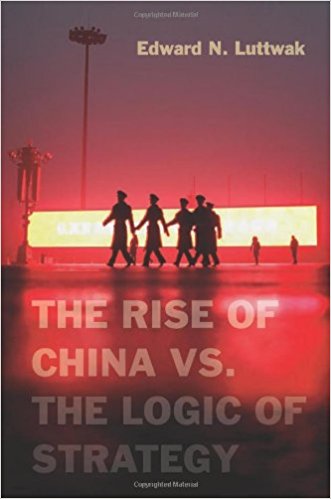 This is yet another book that obsesses and agonizes over China’s rise, how the logic of strategy will dictate the choices China makes and the responses its actions are likely to evoke. China’s political leaders are said to have little agency to dictate this future course though, ‘trapped’ as they are ‘by the paradoxes of the logic of strategy’. Edward Luttwak goes on to argue that there is an ‘inherent incompatibility’ between China’s growing economic capacity, military strength and diplomatic influence. The ‘logic of strategy’ is said to be an ironclad one, which ‘applies in perfect equality to every culture in every age’. Attempts to throw in some humour to relieve the monotony of the narrative often tend to be facetious. Take for instance this flippant description of China’s rise and the reactions it evokes. ‘Riders in a crowded elevator cabin into which an extremely fat Mr. China has just stepped in must react self-protectively if he is becoming fatter at a rapid rate, squeezing them against the walls—even if he is entirely unthreatening, and indeed affable.’ He assumes that ‘mounting opposition to China’s aggrandizement’ is likely to result in a collective strategy of ‘geo-economic resistance’ to China.