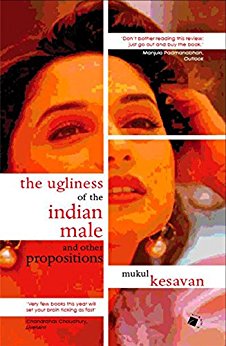 The Ugliness of the Indian Male is an uneven collection of assorted essays—journalistic and academic—written by Mukul Kesavan from time to time. A trained historian, an avid reader, cinema and cricket connoisseur and political commentator, Mukul Kesavan’s essays bear an imprint of his varied interest. In fact his interest areas underline the very organization of this book: the four sections of the book are appropriately titled looking, reading, travelling and politics, in abject isomorphism with his felicity and forte. The very first sentence of the ‘Introduction’ substantiates the conjecture and prepares the reader, ‘Every English speaking Indian-man between twenty-five and sixty has written about the Hindi movies he has seen, the English books he has read, the foreign places he has travelled to, and the curse of communalism.’

Reading a book of essays could be a taxing exercise: more so when one has so much to look at/ for, wade through and comprehend with the added apprehension of cryptic harangues cropping up every now and then. Yet the credit goes to the writer (or perhaps to the title) that the first associative reference/image that strikes the reader’s mind, while s/he ‘looks’ at the title and absorbs the first declarative sentence of the first essay, is the Sergio Leone directed Western: ‘The Good, the Bad and the Ugly’, released in the US in December 1967 and perhaps hitting the subcontinent shores about the same time when the writer, being a Stephenian, was gunning for ‘Bhumikas’ rather than a Rajesh Khanna movie. On the other hand the rest of the nation, during the seventies, indulged wholeheartedly in typical ‘unrefracted ways’ to establish Rajesh Khanna as the first superstar of Bollywood.

As we look through, almost spellbound at the first clip, the other eight essays of the first section in a process of panning covers the first informative undergraduate understanding to the tracing of the last insightful under ‘Roots of Hindi Cinema’. Yet the icing on the cake, strangely or may be ironically enough is an almost non-filmy essay that explores nuances of ‘hygiene’ as it considers John Abraham and former Pakistan President Musharraf in one breath. Thus despite its digs at the physiognomic gestures and antics of the Indian male, and the author’s verbal retort at the end that they are always paired off with good looking women, the fluid beauty of this short essay thrusts and encrypts itself at the title page itself. Ugliness indeed carries potential propositions of being the flag bearer or sometimes the flag itself. It could very much be mentioned as an aside that the odd essay in this section is the ‘Peoples’ Princess’ i.e. Deathwatch Diana, but one could very well turn a blind eye towards this sterile rendering.