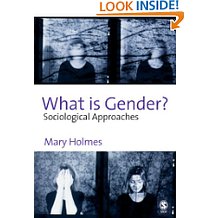 This thin volume entitled What is Gender?, an introductory textbook on the sociological approaches’ to gender, provides a competent and comprehensive overview by organizing issues involved into a neat analytical frame. Its author Mary Holmes, a lecturer in the department of sociology at Flinders University of South Australia, provides a politically grounded introductory account of the category of gender by bringing together the legacy of the women’s movement in the West, the diverse theoretical strands of feminism, and the contributions of theories of class, race, language and psychoanalysis to the study of gender. It also underlines the importance of third world feminism in destabilizing the foundational tenets of western feminism, therefore once again giving credence to feminisms in the plural.

The text is organized around a set of questions that serve as chapter titles. After a brief introduction that defines the key terms such as sex, gender and patriarchy and provides a sketchy history of the interface between gender and sociology, the book launches on the beaten track of Gender Scholarship: the foundational debates on the sex/ gender dichotomy, equality versus difference debate in feminism, debates of second wave feminism on the interface between class, race and gender, recent discourse on the politics of the body and sexuality, and questions concerning identity politics and women’s mobilizations. Holmes does a fair job of summarizing the key positions pertaining to each of these issues, selecting carefully from a burgeoning catalogue of books on gender. Throughout the text the keywords have been highlighted to mark their significance. Further, elements of theoretical debates between rival schools of thought are schematically outlined in tabular form—a useful tool for undergraduate students.

Holmes is successful in communicating that gender is a material relationship of inequality, closely linked to the ways in which it is performed in societies through linguistic and cultural practices. However in this endeavour she almost exclusively relies on the technique of mapping the contours of competing theoretical paradigms of feminist scholarship, which is not without its limitations. For instance, one of the central questions posed here is: ‘whether gender is done to us or do we do gender?’. After a rather elaborate tour through feminist debates, the meaning of gender is located midway between the hierarchical structures of inequality and the habitus associated with those structures and the possibilities that women can forge within those structures in their capacity as agents. A textbook on ‘sociology of gender’ would have done rather well to show how this is but a gendered version of the classical structure-agency debate in sociology, and it is indeed the sophisticated conceptual apparatus of Pierre Bourdieu that is being deployed to resolve the puzzles here. Further, the book hardly mentions debates surrounding feminist methodologies.