How the Tricolour Came to be Invented 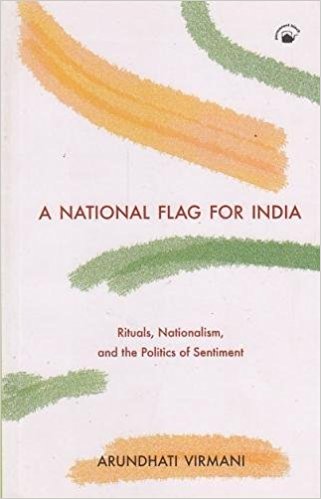 How the Tricolour Came to be Invented
Rakesh Batabyal
NATIONAL FLAG FOR INDIA: RITUALS, NATIONALISM, AND THE POLITICS OF SENTIMENT by Arundhati Virmani Permanent Black, 2009, 358 pp., 750
October 2009, volume 33, No 10

The French Revolution and its aftermath, and the phenomenon of the French Nation have enthused generations of French historians to bring out, from a completely different historical trajectory, the meaning and encoding of French national symbols. A whole range of knowledge production has preceded such historiographical exercises and therefore the experiment has its own intellectual genealogy. Arundhati Virmani’s book is inspired by and based quite prominently on the French discourse. It is the first of its kind barring an innovative paper by Sadan Jha. Divided in three parts and eight chapters, the book brings back the flavour of the modern practice of archival research and non-scholastic practice of referring to facts and not authorities. The first part talks about the way a flag was invented by the colonial authorities to give an ‘imperial identity for India’ and also about the efforts towards the creation of ‘nationalist images’ that would provide an alternate symbol.

The second part of the book which is also the meat, discusses the manner in which an idea of a common national flag began to emerge through the process of consensus, beginning with the Nagpur Satyagraha of 1923. For Virmani, this phase can also be called the phase of ‘nationalizing’ of the flag. The part also discusses the evolution of the Pakistan flag. The emergence of the Pakistan flag brings to the fore the idea that was established by then of ‘no national flag without a nation’. But then there were communities too which did not want, as Virmani shows, to be part of some other flag system and put forward their own flag as a pointer. Thus, communal politics was played out in the domain of the flag and the contest over emotions now finds articulation not only on the streets where the communalized crowd gathered, but in the symbols they carried, their flags being one among these. Part three of the book begins with the chapter ‘uses of the flag in Independent India’ and ends with ‘a flag for each citizen’. The national flag in Independent India, as one gleans from the chapter, betrays no sentimental attachment either of the author as it turns out in her dexterous weaving of its history, or of the new citizens.

Virmani details the coming of the Indian National Flag, its evolution and its acceptance by the leadership and common people. She also dwells at length about the negotiations around the flag as symbol, which finally provides a flying signature to the republic. The capacity of the flag to create political realities through symbols is the heart of this book. The author traverses the career of the flag from a point when for the great majority of Indians, at best the flag seemed to be an object of curiosity, and at worst an exotic element during the first decades of the 20th century (p. 63), to the moment when the efforts at ‘nationalizing the flag’ (p. 80) reached fruition. The real demand for a flag it seems had appeared in 1907–8 during the Swadeshi movement. The new mobilization against the colonial power needed a symbol of unity and this might have been the reason. But in actuality, the flag comes of age in the 1920s when there was a demand for a Swaraj flag. Virmani very competently has shown the complexities in the process and how at a later stage Gandhi adroitly handed the complex issue of building consensus around the flag including when the demand was made by the Panthik Sikhs for their black flag to be adopted or accommodated.