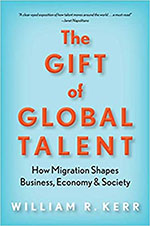 This racy, jargon-free yet well researched book, interspersed with interesting anecdotes and illuminating facts, demonstrates quite convincingly how foreign talent that found a welcoming environment in the US has transformed American society in general and its science and engineering in particular. It is the author’s contention that recent happenings in the US, particularly the hostility against immigrants, consequent to growing inequality within the US and across the globe, is adversely affecting the flow of talent into the US, which may have long term negative consequences, if not addressed by America’s political and administrative class. The author’s focus is primarily on high-skilled migration, the processes and policies governing such migration and the impact of such migration on business, rather than on general migration or those covering family reunification or refugee objectives.

Admitting that it is easier to recognize rather than define ‘talent’, the author uses three approaches to measure talent. Deploying individual-level data for Nobel Prizes in Chemistry, Medicine, Physics and Economics, the author notes that, since 1901, 31 percent of Nobel Prizes awarded in the above subjects have been to scientists working outside of their countries of birth (203 of 661 individuals), while America received 53 percent of all global migrants who won the Nobel Prize in the above four fields (107 of 203 individuals) (pp. 22-24).

Second, using the World Intellectual Property Organization (WIPO) data on patents and inventors, the author shows that ‘foreign nationals account for 18 percent of inventors who filed global patents during the 2000s…roughly one in four technologies developed in the US was invented or coinvented by a foreign-born inventor…