The Indiscreet Charm of Technocracy 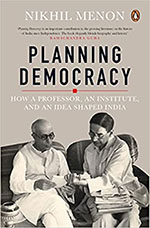 The Indiscreet Charm of Technocracy
Indraneel Dasgupta
PLANNING DEMOCRACY: HOW A PROFESSOR, AN INSTITUTE, AND AN IDEA SHAPED INDIA by Nikhil Menon Penguin/Random House India, 2022, 312 pp., 799.00
September 2022, volume 46, No 9

Around the time India became independent, almost everybody who was anybody within the country agreed, or at least pretended to, that India’s economic development required a strong dose of centralized economic planning. Big Business wanted planning to provide import protection and Keynesian demand management, even some redistribution to ward off Communism.  Socialists, latterly infatuated with the Soviet model, wanted planning to generate rapid economic growth, national autonomy and modernization. Gandhians wanted planning for their beloved domestic and cottage industries.  Even the colonial state, towards the end of its life, had set up a Planning and Development Department that produced a report echoing the National Planning Committee of the Congress in its triple mantra of industrialization, interventionism, and protectionism. By 1944, economic plans were being flashed around almost by the dozen.  Indians got the colonial state’s report on planning, the Bombay Plan of Big Business, MN Roy’s Communist People’s Plan, the Muslim League’s own Planning Committee, and even a Gandhian Plan with a foreword by the man himself.  It was thus, only natural that the independent state should set up its Planning Commission as soon as it could, which it did in 1950.  This excellent book offers an account of what happened next.  It charts how the institutional logic of centralized physical planning created its own institutional apparatus and key dramatis personae, and how cultural agents as disparate as Bombay film-makers and Hindu holy men got implicated in the promise of modernization and prosperity through paternalistic centralized planning.  In doing so, it provides a fascinating institutional and cultural history of independent India during the first two and a half decades of its existence, through the prism of planning and statist development.

Part I of the book, spread over three chapters, discusses the building of a technocratic, data-obsessed, high-modernist state and its attempts to make the economy legible through quantification.  Two aspects are highlighted: statistics (data-gathering or data-organizing) and computing technology (data-processing). Chapter 1 documents how the quantitative needs of physical planning birthed and nurtured India’s statistical infrastructure and data-gathering institutions.  It discusses the early career of The Professor—physicist turned statistician P.C. Mahalanobis—and the institution he founded in Calcutta, the Indian Statistical Institute (ISI).