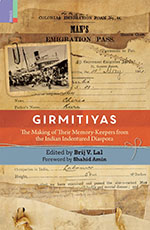 In the early 19th century, when slavery was abolished in the British empire, more than one million Indians were taken to various European colonies such as British Guiana, Fiji, Natal, Mauritius, Suriname and Reunion as indentured labourers. These labourers, the victims of systemic caste oppression, famine and drought in India, were forced to sign an agreement (a contract) before they began their arduous journey to these colonies. Based on this agreement they were issued an emigration pass that not only listed the details about the workers but also laid out stringent rules of work, places of dwelling, food rations and terms of completion of work. This contract was for five years and extendable but they were given an option to return to India at their own expense or after ten years at the expense of the colonial Government. Critical labour studies on the abject working conditions of these ‘agreement’ workers and their inhuman dwellings, known as ‘coolie lines’ are in abundance. Eminent historian, Brij V Lal, one of the descendants of the ‘agreement signers’, known as Girmityas (a term derived from the English term agreement) who is also the editor of this book under review, has systematically reconstructed the life history of these workers by closely scrutinizing 45,000 immigrant workers’ emigration passes.

This book is not about the story of immigration of Girmityas but about the Girmitya diaspora. The one that is distinct, different and hitherto understudied and under-represented India unlike the other highly visible Indian diasporas in the USA or in Europe. The Indian Government since 2003, observes 9th January (the day Mahatma Gandhi returned to India from South Africa in 1915), as Pravasi Bharatiya Divas, to acknowledge contributions made by the Indian community living abroad but beyond such celebrations and myth making about their Indianness and patriotism, little effort has gone into understanding and engaging with the complexity and diversity of the ‘Indian diaspora’.