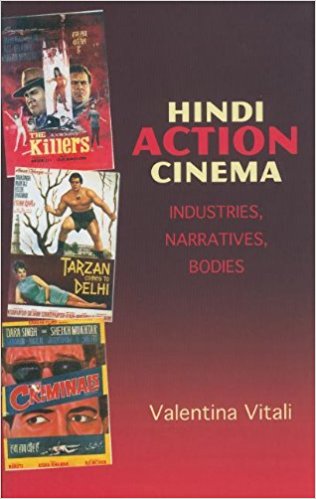 Valentina Vitali’s book Hindi Action Cinema: Industries, Narratives, Bodies, traces the historical trajectory of action as a significant component of popular Hindi cinema. Moving from the silent period to the contemporary, the author attempts to locate the ideological function of action as a defining element in popular cinema. Tracing the action genre at the intersection of production, distribution and exhibition, the primary objective in the book is a desire to understand genre as a structural category. Methodologically the book combines information generated by studio records with biographies, interviews and secondary analysis of the South Asian context. The introduction offers an overview of debates on genre, the writing of film history, and cultural theory. The author foregrounds the need to understand the commercial-industrial pressures shaping film’s formal logic, extending this structural account of film form to make larger connections with the country’s economy.

However while stating that histories of National cinemas are overwhelmingly written from the point of view of production, in this book the author’s attempt is to foreground the context of exhibition in the historical account of films. Hindi Action Cinema argues that exhibition played a decisive role in the internal fragmentation of the film industry, resulting subsequently in the emergence of the action genre. Further the book attempts to intervene against a particular kind of historiography which the author suggests is too linear to incorporate the complexities of industrial logic in the production and circulation of cinema. Despite this tall claim for a non-linear historiography, the author divides the book into chapters that follow a linear chronology.

The first chapter traces the journey of action as an insignificant element in the 1910s to a major force in the 1920s, focusing primarily on the ‘stunt films’ of the Sharada Film Company and its major star Master Vithal. The Sharada Company suggests the author was set up in the mid 1920s when film production was slowly taking an industrial shape. Generic differentiation is weak at this time but stunt is used to promote and expand the film market.