Has Academe Got it Wrong? 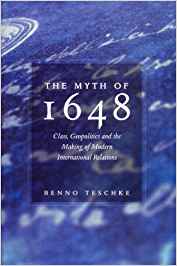 Of only a very few books can it be said that they are truly path-breaking. The Myth of 1648 is one of them and is a deserved co-recipient of the prestigious Isaac Deutscher Memorial Prize for 2003. The 1648 Westphalian Settlement of the Thirty Years War in Europe between the major Absolutist states is conventionally viewed in the disciplines of macro-history and International Relations (IR) as the inaugurating moment of the modern geopolitical order of sovereign, competing states. The imperial-colonial expansions and rivalries of the eighteenth, nineteenth and first half of the twentieth centuries, subsequent de-colonization, and more recently the collapse of Communism, are seen as affecting only the scale and composition (rising and declining powers) of the modern international system, but not its essential character. Capitalism and Geopolitics: Historical Sociology and IR:  Teschke completely destroys this claim showing that the Peace of Westphalia was a compact between pre-capitalist dynastic states practising a dynastic sovereignty not to be confused with modern capitalist sovereignty.