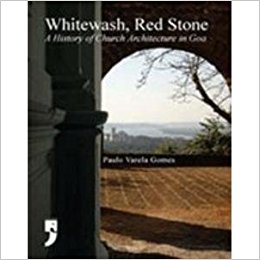 The evocative title of this scholarly work captures with immediacy a vision of Goan churches standing tall and white on red earth surrounded by a lush green landscape. It also describes the salient structural feature of the Goan church, the laterite stone whose emotive power was captured by F.N. Souza in his work Red Road and in his writing : ‘A beautiful country, full of rice fields and palm trees; whitewashed churches with lofty steeples; small houses with imbricated tiles, painted in a variety of colours. Glimpses of the blue sea. Red roads curving over hills and straight across paddy fields. Morning is announced by the cock crowing; the approaching night by Angelus bells.’ The Red Road in Souza’s recreation is a blood red fissure on a green but abandoned hill, flanked by a church and what appears to be a Portuguese fort. The roads leading to the fort are painted white perhaps to suggest the colonizer’s highway to the two powers of church and state on either side. The confrontation is between the temporal and evanescent nature of power against the permanent primal flow of red earth and fertility.