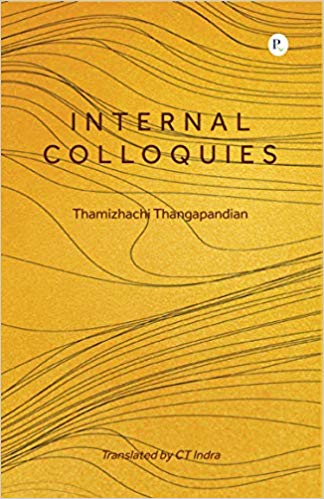 Professor CT Indra has, over a period of time, evolved as a committed translator, covering a wide range of genres that include plays, novels and short stories. Internal Colloquies, a translation of selected poems from Thangapandian’s Vanapechi is, by her own admission, Indra’s ‘maiden attempt’ at translating poetry. Sumathy (aka Thamizhachi Thangapandian) is a well-known contemporary poet and writer who has published nineteen books till date. She has one publication in English on the Sri Lankan playwright Ernest Thalayasingham, and is also a theatre artist.

The book is a bilingual edition that has Indra’s translations in English on the right side, with the original poems in Tamil on the left. Although ‘colloquies’ imply a dialogue, or a conversation between two or more people, many poems in this collection come across as soliloquies, wherein a discourse is made upon oneself, introspectively, and in solitude. In Thangapandian’s poetry, what could lapse into an otherwise solipsistic indulgence is deftly avoided by an invisible second voice that is altruistic, and creeps in to check or balance the first. The ironical twist in the poem ‘Saline’ is a case in point, where the rhetorical question is in itself an answer. In the poem ‘This Heat is Different’ two variant points of view fuse and make room for the poet to have a candid dialogue with herself.

The unusual choice of themes ranging from ecology, environment, the close-knit intimacy of the rural community, the way people belong to their natural surroundings accepting the vagaries of weather show a poet who cares a lot for the planet. Taking off from the innocuous potted plant, ‘Existence’ is a poem that ripples out with associated situations that echo again in another poem ‘Astonishing Feat’.