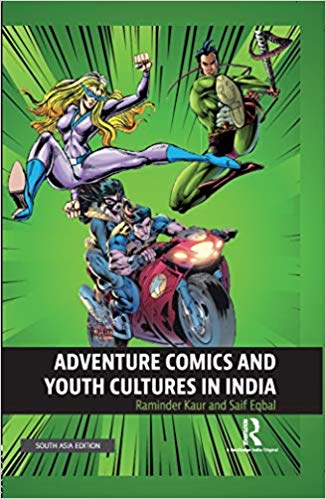 Raminder Kaur and Saif Eqbal take on the mammoth task of analysing and categorizing the immense corpus of the north Indian vernacular superhero and adventure comics published by popular comic houses such as Indrajal, Raj Comics, and Manoj Comics. Through painstaking archiving, interviews with the makers and readers of these comics, Kaur and Eqbal navigate a landscape that stretches through the entire Hindi speaking north Indian belt, and a time period that spans over 30 years beginning from the 1980s.

The authors divide their book into 11 chapters, each dealing with a different aspect of the comics. The first three chapters are devoted to establishing the unique characteristics of these Indianized superhero/adventure comics and claim that they are not a transcreation of the western superhero model but the Hindu mythologies informing them lend a uniquely Indian flavour. The  chapter titled ‘Golden Age of Superheroes’ traces the beginnings of the Indian superheroes, of which Nagraj is seen as the most remarkable origin story. They claim he’s inspired by Spiderman (as is Tiranga from Captain America) and not derived because he has his own regionally tethered motifs. They offer a detailed material history of the comics, their origin, inspiration, material aspects, and the audience which consumed these comics. In fact a few sections even categorically mention the political climate in which these superheroes are written and designed, however, they shy away from making any insightful cultural or political reading of the comics that links the two.

Chapters 4 to 8 explore the cultural and thematic concerns of the comics such as issues of gender and masculinity, science and para sciences, hypernationalist themes in the comic and the motives of various supervillains. Chapter 4 engages with the issue of gender in the comics. The sexualization of female bodies is seen as a symptom following from western comics. However, what separates women of Indian adventure comics as they claim, is that they are not confined to merely domestic roles, are untethered, and may even be ‘emancipated’. Similarly masculinity and hyper-masculinity in the context of superheroes is seen in relation to the nation and the role of vigilante as opposed to patriarchy or sexual virility. The fact that many superheroes such as Super Commando Dhruv, Doga, Nagraj have either girlfriends or live-in partners, or the fact that they have female sidekicks who come to rescue them is evidence enough to declare the egalitarian intentions of the comics.