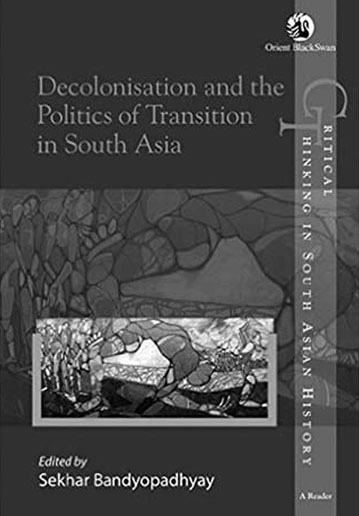 Decolonisation and the Politics of Transition in South Asia consolidates the debate concerning the transfer of power in South Asia, and maps the trajectories of the early postcolonial state in the region. Some of the essays in this volume are old and have stood the test of time. In fact, historians of my generation grew up with them in the last couple of decades. Those works hardly demand a rigorous re-evaluation from a reviewer of this volume. However, their repackaging with a number of new works and a brilliant editorial introduction makes it a game-changing volume in the research—and perhaps more importantly—in the teaching of regime transitions in South Asia after the fall of the British Empire.

The Introduction interrogates the long-held understanding of decolonization in South Asia as a ‘political event’ (p. 1, emphasis added) that resulted in ‘the transfer of power from the empire to nation-state’ (quoted in p. 1), or to put it in the language of political theory, from ‘imperial sovereignty’ to the postcolonial ‘popular sovereignty’ (see for instance the contributions in Part II of the volume, especially the essays by Ramachandra Guha and Dipesh Chakrabarty). The Introduction frames decolonization not so much as ‘an event’—a one time, one space phenomenon—but, as ‘a long-drawn-out process of political transition’ (p. 2, emphasis original), involving layered dialogue ‘between the colonial past and the postcolonial present, a dialogue that has not yet ended’ (p. 4).