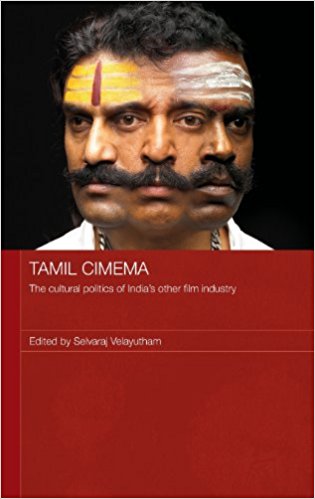 Selvaraj Velayutham’s edited volume, which is perhaps one of the first academic attempts to take a comprehensive look at the Tamil film industry , “of one of India’s largest, most prolific and increasingly significant cinemas” (Velayutham: 1) has hit the market at a time when Bollywood is hogging attention and space in academic circles as a global brand. It is interesting in that while most publications in Tamil cinema focus solely on the cinema-politics nexus in Tamil Nadu, this book highlights the dynamics of the culture that Tamil cinema purveys. The collaged image of the three main male characters from KamalHassan’s Virumaandi (2004), a disturbingly violent film depicting clan feuds in rural Tamil Nadu, the men complete with twirled moustaches, thick neck chains, white shirts and vermilion and holy ash on the foreheads, seems to place the book squarely within the boundaries of cultural studies.

However, the book also straddles the disciplines of sociology, political science, media studies and women studies and attempts to encompass different aspects of Tamil cinema — from the representation of women, the transition of the heroine from an ideal woman to a pleasurable object, the leverage that cinema has provided to politics, to the ‘remaking’ of rural Tamil Nadu that it has attempted and the imagination of the ‘South’ that it leads to. It also deals with two emerging aspects of significance: the reconciliation of ‘Tamilness’ with ‘Indianness’ attempted in recent times in Tamil films and the diasporic conception of Tamil cinema.

The book begins with Velayutham’s brief account of the history of Tamil cinema, which he asserts is “one of the most important but often overlooked film industries in India” (p. 8). While it is indeed true that scholarly writing in English on Indian films has mostly remained confined to Bollywood, there is much literature in Tamil. Indeed, ‘Tamil cinema’ has dominated media studies research in Tamil Nadu, if not India, for quite some years now. The book then moves on to two chapters on the depiction of women in Tamil films.