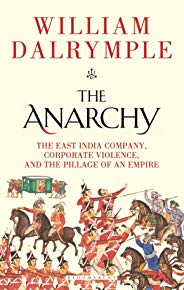 In September 1499 Vasco da Gama returned to Lisbon, having successfully travelled to Malabar via the Cape of Good Hope route. A century later, a group of London merchants launched the trading venture, which was to grow into a giant modern corporation, the East India Company (EIC). These London merchants petitioned Elizabeth for a royal charter that would give them the exclusive right to trade with the ‘East Indies’. The charter was granted in 1600, marking the beginning of the company’s monopoly. The EIC’s charter was renewed from time to time allowing it to monopolize the trade between England and Asia for over two centuries. William Dalrymple’s The Anarchy is the story of the rise of the EIC, from modest beginnings to its ascendancy in the latter half of the eighteenth century.

Vasco da Gama’s voyage had demonstrated the viability of the new all-sea route between Europe and the Indian Ocean. Already by the late 1480s Bartholomew Diaz had established that there was a sea passage between the Atlantic and the Indian oceans, along the southern coast of the African continent. For most of the sixteenth century the Portuguese controlled the all-sea Cape route, and thereby the long-distance trade between Europe and Asia along this route.