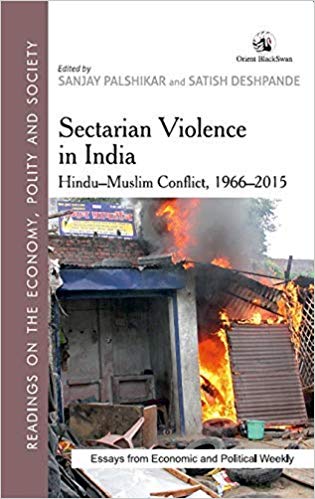 That Hindu-Muslim conflict, either in its simmering presence or in its periodic violent expressions, has been endemic to Indian public life cannot be denied. And, politically, the malady has been routinely attributed to the obnoxious ‘other’. There was once a group which used to inveigh against ‘communalism’ as a frustration of the genuine national project. But of late ‘communalism’ has been waging war against ‘pseudo-secularism’ and proclaiming itself as representing true nationalism. Its political dividends have been spectacular enough to warrant a redefinition of nationalism itself! It is significant that in such an effervescent mood of ideological triumphalism, some serious thoughts of social scientists on sectarian violence in India have been exhumed from the back volumes of Economic and Political Weekly (EPW) and presented to the readers. They belong to the period 1966-2015, and the editors have selected 38 from 430 articles, reports or other columns (not counting editorials or letters to the editor). Clearly, even as Hindus and Muslims were snarling at each other and flying at each other’s throat, scholars were busy writing about them, not applauding them, but telling them as to what was really wrong in the country. Not that those who manufacture sectarian riots or run amok in the streets care to listen to them. But they have apparently done so because there is yet a sober segment in our society which wants to know what ails the country and want a fair deal for all.