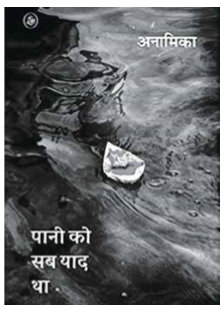 Reading Anamika is like getting back to a world of memories, fun filled laughter, aspirations of a young adolescent female who enjoyed being in the company of trees and streets, books and beats. Anamika is a recipient of several literary awards like the Kedar Samman in 2007, Sahitya Setu Samman in 2004, Parampara Samman in 2001, Bharat Bhushan award for poetry in 1996. As a poet, a novelist, a translator and a critic she has extraordinary merit. She raises profound questions and has addressed the woman question with unbending faith and courage. Some of her major poetry collections are Doob Dhaan, Galat Patey Ki Chitthi, Beejakshar, Anushtup, Khurduri Hatheliyan, Tokri Mein Digant, Kavita Mein Aurat, Theri Gaatha. Paani Ko Sab Yaad Tha (Water remembered everything), her most recent book of poems in Hindi captures life in its multiple shades. The writing becomes a tribute to women who have been victims of patriarchal society.

By drawing women and men from the margins to the centre of her poetic discourse she not only speaks of the anger and anguish of the helpless, but by redefining their actions she retrieves them from the annals of history, myth and memory. Her choice of language is Hindi with interesting rhythmic patterns and colloquial diction. She identifies with the local dialects and uses them profusely in her poetry. A suffusion of Maithili, Bajjika, Bhojpuri, Magadhi and Angika adds to her rich repertoire in Hindi. Her poetic tradition reflects multiple influences—if she is calm and intense like Mahadevi Verma in a few poems, one also sees the rage of Nagarjun or the aesthetic innovations of Kedarnath Singh in her literary oeuvre. Her literary interests were shaped by her parents who were Professors in Muzaffarpur, Bihar. A bilingual writer with an equal felicity in English, Anamika is capable of drawing the best of both the traditions, from the East and the West. Her literary forebears enriched her understanding of the local landscape and her engagement with the global gives her the freedom to enter multiple subject positions.