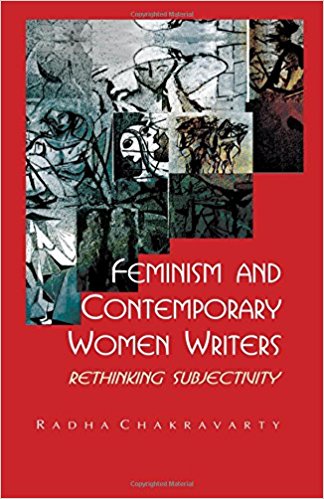 Radha Chakravarty’s book Feminism and Contemporary Women: Rethinking Subjectivity is based on her Ph.D. dissertation on the same subject and retains all the qualities of a solid, well-researched dissertation. It investigates a familiar enough field of enquiry – subjectivity, with related notions of identity and agency – which has continuously engaged philosophers, anthropologists, psychoanalysts and scholars from a wide range of disciplines, but instead of situating the notions strictly in an ideological or theoretical frame, the book broadens their scope by applying and examining them in the context of creative writing. Subjectivity, in common definitional terms can be gendered, transcendental, national, ideological or volitional; it is seen to be socially and historically constructed; it is invested with agency and authority or is subjected to subordination; it can be located and read in terms of the law of desire and the forms of language.

The possibilities of agency and construction of subjectivity however, opens a ground for subjugation and deconstruction, and feminist criticism has picked up both these possibilities for a theoretical debate on subjectivity. Chakravarty’s focus is also feminism, but not of the radical kind. None of the six women writers she has studied is radical in their feminist arguments; they appear rather to believe in gender equality as more than an end in itself – as a means to a wider social development. In arguing for rethinking subjectivity in terms of the insights and the visions of the six novelists, Chakravarty thus quite forcefully proposes feminism as a practice of reading, not only literary or social texts and discourses for their emancipatory possibilities, but also the engendered subject, the female body, in relation to sexuality, race, ethnicity and class. This is essentially a multiple reading where cultural representations along with subject position differences call for close scrutiny.

Chakravarty’s study makes use of contemporary theories of feminism, cultural studies and postcolonialism (she dismisses the narrow conceptual bind of some western theories such as postmodernism). But she clearly relegates theory to a secondary position to creative writing, mainly from an anxiety to minimize the purely conceptual/polemical or political in favour of the literariness of texts. Indeed, one important contribution of the book has been its combining theory with practice and proposing theory as complementary to narrative. Throughout the book, Charkravarty maintains a productive tension between the general and the particular, and is clearly against procedures of abstraction and hair-splitting, normative analysis–a practice that turns many a well-intentioned research into a purely reductive piece.