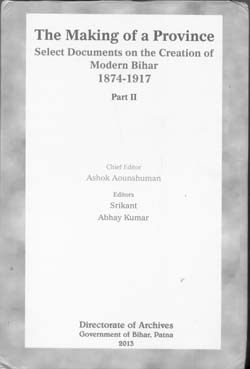 Among the recent works on Bihar, men- tion may be made of Vinita Damodaran (Broken Promises, 1992), Papiya Ghosh (Community and Nation, 2008), Hitendra Patel (Communalism and the Intelligentsia, 2011), Narendra Jha (The Making of Bihar, 2012), Lata Singh (Popular Translations of Nationalism, 2012). Earlier, K. K. Datta’s three volumes of detailed narrative of the Freedom Movement in Bihar (1958) published by the Government of Bihar and the Comprehensive History of Bihar published by Patna’s K.P. Jaiswal Research Institute (1976), and a few more useful works from professionally ‘lesser known’ publication houses have also come out like those of Umeshwari Charan (Responsible Government, 1985), Md. Muzaffar Imam (Muslims and the Freedom Movement, 1987), and Kamta Chaubey (Role of Muslims in the National Movement, 1990). In addition to that Srikant, a co-editor of the volume under review, along with Prasanna Kumar Chaudhry, has published a few well-researched works in the Hindi language.