The Story in Vignettes 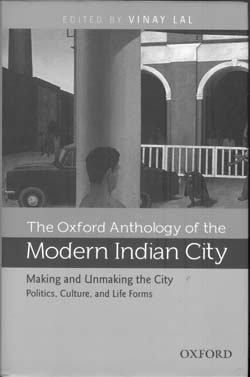 The Story in Vignettes
Sucharita Sengupta
THE OXFORD ANTHOLOGY OF THE MODERN INDIAN CITY (TWO VOLUMES): THE CITY IN ITS PLENITUDE /MAKING AND UNMAKING THE CITY: POLITICS, CULTURE AND LIFE FORMS by Vinay Lal Oxford University Press, New Delhi, 2014, 382 pp., 950
July 2014, volume 38, No 7

Long before the city became trendy, there was the Indian city. It existed in our colourful and incredible mythology. It existed when the first of human civilization took root on the subcontinent. It was central to the multiple kingdoms that flourished from corner to corner in this vast land for centuries. Yet, when we gained Independence, our self-image as a country was one that was largely bucolic. Perhaps, the take-over of existing cities or creation of new ones by the British, marking them out as centres of arrogant power, turned them into places of revulsion and fear? Or was it Gandhi’s distaste for what the city purportedly bore—modernity of the western sort—and his fantasies of village republics that etched the village as the desirable polar opposite in the minds of his admirers? In the midst of such idle speculations, the fact remains that the urbane was as much part of Indian spatiality and life as the rustic.