Evolution of a Religion 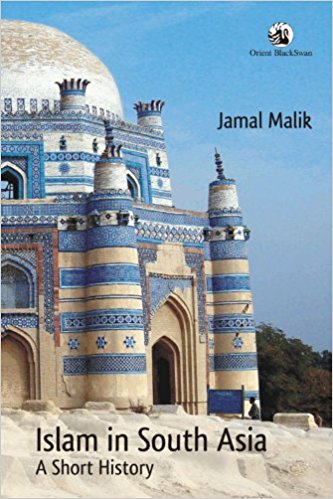 Jamal Malik’s book Islam in South Asia: A Short History is anything but a short history of the religion as it evolved in the region. Running a good 500 plus pages this is one of the most dense and comprehensive histories on the subject. It synthesizes for the reader the long history of Islam: from the Arab conquests, through to the Turkic and Afghan based dynasties of the 13th century, and into the period of European expansion and the experience of colonial rule that followed in the 19th-20th centuries. Much of the material presented is familiar to the interested audience of Islamicists and South Asianists. But the narrative is engaging because it is couched in an interesting framework that makes a plea to understand Islam as a significant strand embedded in South Asian political culture. Not, as is often the case in textbooks, as some external force that was shaped by Indian society without necessarily moulding the politics and culture of the subcontinent with equal if not more fervour.

Viewing Islam as an intrinsic part of Indian society gives Malik the vantage point of seeing its history in the subcontinent as a series of cultural encounters that were mutually energizing. These encounters, he argues, were both intra-tradition as expanding temporal and spatial borders in the subcontinent opened up new contact zones for Islam. This often redefined religious codes and opened new negotiations over issues of identity. Inter-tradition cultural encounters also took place—framed as they were within new temporal frontiers and fresh contact zones. This methodology enables him also to locate Islamic engagement with later European and colonial interventions as part of a larger story of the colonized subcontinent, rather than as something unique because of the intrinsic ‘backwardness’ of Islam. It thus helps him steer clear of the ‘orientalist empiricism’ that often underpins colonial and nationalist historiography on Islam.

Thus what emerges in Malik’s meta-narrative is an engaging account of the history of ideas that derived from an Islamic imperium and their material connect to diverse structures of power and authority. Here, the story of Islam in South Asia is extremely engaging because it is narrated alongside the larger story of social and political change as India moved from its pre-colonial past into the colonial era. The book continuously engages with the larger historiography of South Asia’s transition to a colonial society, and thus underlines the naturalized position Islam held in this transition. The location of Islam in such a liberating analytical space lends to Malik’s textbook a unique status.